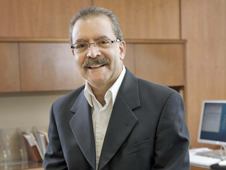 Grunsfeld made the announcement at an annual gathering of Mars scientists and engineers in Dulles, Va. Figueroa, a consultant with more than 30 years of aerospace experience, will lead the scientific and technical team to develop an integrated strategy for NASA's Mars Exploration Program in light of current funding constraints. The team's initial focus will be on a possible 2018-2020 robotic mission. The program's official framework will be developed in consultation with the science community and international partners and is expected to be released for full review as early as this summer.

"The team will develop a plan that advances the priorities in the National Research Council's Decadal Survey, which puts sample return as the top scientific goal, and leverages NASA's research in enabling technology," Grunsfeld said. "Our investments in the new Mars program will incorporate elements of advanced research and technologies in support of a logical sequence of missions to answer fundamental scientific questions and ultimately support the goal of sending people to Mars."

The MPPG will report to Grunsfeld, a physicist and five-time flown space shuttle astronaut. Grunsfeld is chairing the overall, agency-wide reformulation strategy along with William Gerstenmaier, associate administrator for the human exploration and operations directorate, NASA Chief Scientist Waleed Abdalati and NASA Chief Technologist Mason Peck. The MPPG will ensure that America maintains the critical technical skills developed over decades needed to achieve the highest priority science and exploration objectives.

NASA has a recognized track record of successful Mars missions. The rover Opportunity, which landed on Mars in 2004, is still operating despite an official mission timeline of 90 days. There are also two NASA satellites orbiting the Red Planet; the Mars Reconnaissance Orbiter and Mars Odyssey. The duo continue to return unprecedented science data and images. This August, NASA will land the Mars Science Laboratory, "Curiosity," on the planet's surface. This roving science laboratory will assess whether Mars was or is today an environment able to support life. In 2013, NASA will launch the Mars Atmosphere and Volatile Evolution orbiter, the first mission devoted to understanding the Martian upper atmosphere.

NASA will continue to gather critical information to help scientists understand the Red Planet. These data will be used in future years to meet President Obama's challenge to send humans to Mars in the mid-2030s.

"We'll look at all of the assets NASA is developing to reach, explore and study Mars, as well as spacecraft at or on its way to Mars," Figueroa said.

NASA already has been developing technology that will improve precision in landing, the ability to conduct scientific analysis remotely, handle and collect samples, and transmit larger volumes of data back to Earth.

"The science and engineering communities have worked continuously over a decade to define our knowledge gaps for Mars exploration, so we have a solid starting point," Grunsfeld said.

Mars exploration is a top priority for NASA. America's investment in exploring Mars during the past decade totals $6.1 billion. NASA Administrator Charlie Bolden directed Grunsfeld to lead the agency-wide team in order to optimize a coordinated strategy of Mars exploration and continue America's leadership role in the exploration of the Red Planet within available future budgets.