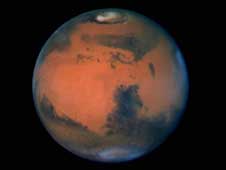 Mars, as seen by the Hubble Space Telescope in 1997. Image credit: NASA/JPL WASHINGTON -- The following joint statement was issued today by NASA and the European Space Agency (ESA):

On June 29 and 30 the NASA Associate Administrator for Science (Ed Weiler) and ESA Director of Science and Robotic Exploration (David Southwood) met in Plymouth, England, to establish a way for a progressive program for exploration of the Red Planet. The outcome of the bilateral meeting was an agreement to create a Mars Exploration Joint Initiative (MEJI) that will provide a framework for the two agencies to define and implement their scientific, programmatic and technological goals at Mars.

Discussions between NASA and ESA began in December 2008, driven by the ESA Ministerial Council's recommendation to seek international cooperation to complete the ExoMars mission and to prepare further Mars robotic exploration missions. At the same time, NASA was reassessing its Mars Exploration Program portfolio after the launch of its Mars Science Laboratory was delayed from 2009 to 2011. This provided NASA and ESA with an opportunity to increase cooperation and expand collective capabilities. To investigate the options in depth, a joint NASA/ESA engineering working group was established, along with a joint executive board to steer the efforts and develop final recommendations on how to proceed.

At the bilateral meeting in Plymouth, the executive board recommended NASA and ESA establish MEJI, spanning launch opportunities in 2016, 2018 and 2020, with landers and orbiters conducting astrobiological, geological, geophysical and other high-priority investigations, and leading to the return of samples from Mars in the 2020's. The director and associate administrator agreed, in principle, to establish the Initiative and continue studies to determine the most viable joint mission architectures.

NASA and ESA also agreed to establish a joint architecture review team to assist the agencies in planning the mission portfolio. As plans develop, they will be reviewed by ESA member states for approval and by the U.S. National Academy of Sciences. This unique collaboration of missions and technologies will pave the way for exciting discoveries at Mars. Media contact: Dwayne Brown 202-358-1726
NASA Headquarters, Washington
dwayne.c.brown@nasa.gov
› Back To Top