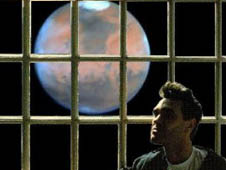 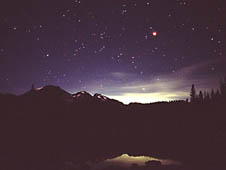 Mars in August 2003 during a 60,000-year record close approach. Even then, the planet resembled a bright star, not a full Moon. Photo credit: John Nemy & Carol Legate of Whistler, B.C. For the sixth year in a row, a message about the Red Planet is infecting worldwide email boxes. It instructs readers to go outside after dark on August 27th and behold the sky. "Mars will look as large as the full moon," it says. "No one alive today will ever see this again."

Here's what will really happen if you go outside after dark on August 27th. Nothing. Mars won't be there. On that date, the red planet will be nearly 250 million km away from Earth and completely absent from the evening sky.

The Mars Hoax got its start in 2003 when Earth and Mars really did have a close encounter. On Aug. 27th of that year, Mars was only 56 million km away, a 60,000-year record for martian close approaches to Earth. Someone sent an email alerting friends to the event. The message contained some misunderstandings and omissions—but what email doesn't? A piece of advanced technology called the "forward button" did the rest.

Tolerant readers may say that the Mars Hoax is not really a hoax, because it is not an intentional trick. The composer probably believed everything he or she wrote in the message. If that's true, a better name might be the "Mars Misunderstanding" or maybe the "Confusing-Email-About-Mars-You-Should-Delete-and-Not-Forward-to-Anyone-Except-Your-In-Laws."

Another aspect of the Mars Hoax: It says "Mars will look as large as the full Moon if you magnify it 75x using a backyard telescope." The italicized text is usually omitted from verbal and written summaries of the Hoax. (For example, see the beginning of this story.) Does this fine print make the Mars Hoax true? After all, if you magnify the tiny disk of Mars 75x, it does subtend an angle about the same as the Moon.

No. Even with magnification, Mars does not look the same as a full Moon.

This has more to do with the mysterious inner workings of the human brain than cold, hard physics. Looking at Mars magnified 75x through a slender black tube (the eyepiece of a telescope) and looking at the full Moon shining unfettered in the open sky are two very different experiences.

A good reference is the Moon Illusion. Moons on the horizon look huge; Moons directly overhead look smaller. In both cases, it is the same Moon, but the human mind perceives the size of the Moon differently depending on its surroundings.

Likewise, your perception of Mars is affected by the planet's surroundings. Locate the planet at the end of a little dark tunnel, and it is going to look tiny regardless of magnification.

To see Mars as big as a full Moon, you'll need a rocketship, and that may take some time. Meanwhile, beware the Mars Hoax. This story originally appeared on Science@NASA
› Back To Top