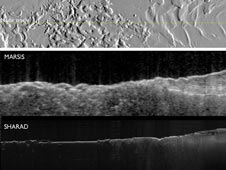 Two complementary radar sounder instruments work together to discover hidden Martian secrets. Image credit: NASA/ESA/JPL-Caltech/University of Rome/Washington Universtiy in St. Louis
›  Full image and caption
A radar instrument co-sponsored by NASA on the European Space Agency's Mars Express orbiter has looked beneath the surface of Mars and opened up a new dimension for planetary exploration.

The technique's success is prompting scientists to think of other places in the solar system where they would like to use radar sounders. The radar sounder on Mars Express is the Mars Advanced Radar for Subsurface and Ionospheric Imaging, or MARSIS. It was built to map the distribution of liquid and frozen water in upper portions of the planet's crust.

As these two instruments continue to provide data, the understanding that they provide about how planetary radar sounders work is prompting ideas for using the technology to explore beneath the surfaces of bodies such as Jupiter's moon Europa, Saturn's moons Titan and Enceladus, as well as asteroids and comets.

Radar sounder instruments orbiting Mars have looked beneath the Martian surface and opened up the third dimension for planetary exploration. Image credit: NASA/ESA/JPL-Caltech/ASI/University of Rome/Washington University in St. Louis
›  Full image and caption MARSIS was funded by NASA and the Italian Space Agency and developed by the University of Rome, Italy, in partnership with NASA's Jet Propulsion Laboratory, Pasadena, Calif. Italy provided the instrument's digital processing system and integrated the parts. The University of Iowa, Iowa City, built the transmitter for the instrument, JPL built the receiver and Astro Aerospace, Carpinteria, Calif., built the antenna. JPL is a division of the California Institute of Technology in Pasadena. Additional information about Mars Express is at www.esa.int/marsexpress.

The shallow Subsurface Radar was provided by the Italian Space Agency. Its operations are led by the University of Rome and its data are analyzed by a joint U.S.-Italian science team. JPL manages the Mars Reconnaissance Orbiter for the NASA Science Mission Directorate, Washington.