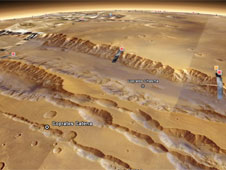 Mars' Valles Marineris. Image from Google Earth. Imagine traveling the surface of the Red Planet, observing millennia-old canyons or viewing Martian dust devils first hand. Now, you can with the advent of a new Mars mode in Google Earth that brings to everyone's desktop a high-resolution, three-dimensional view of the Mars.

Besides providing a three-dimensional view of Mars that will aid public understanding of Mars science, the new mode, Google Mars 3D, also gives researchers a platform for sharing data similar to what Google Earth provides for Earth scientists.

The mode enables users to fly virtually through enormous canyons and scale huge mountains on Mars, higher than any found on Earth. 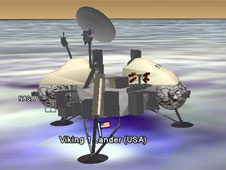 Viking Lander on the surface of Mars. Image from Google Earth. Users also can explore the Red Planet through the eyes of the Mars rovers and other Mars missions, providing a unique perspective of the entire planet.

Users can see some of the latest satellite imagery from NASA's Mars Reconnaissance Orbiter and other probes orbiting the Red Planet, as well as learn about new discoveries and explore indexes of available Mars imagery. The new Mars mode also allows users to add their own 3-D content to the Mars map to share with the world.

"Educators, planetary scientists and citizen scientists alike can use this platform to produce their own maps and tours for the new Google Mars 3D," said Matt Hancher, a research scientist in the Intelligent Systems Division at NASA Ames Research Center, Moffett Field, Calif. "This really opens up a whole new world of participatory space exploration."

To access the Mars mode, download Google Earth and open it up. In the toolbar section on top, click on the small icon resembling the planet Saturn and select Mars.