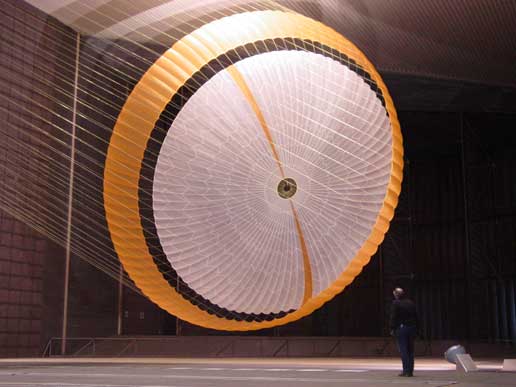 The parachute, built by Pioneer Aerospace, South Windsor, Connecticut, has 80 suspension lines, measures more than 50 meters (165 feet) in length, and opens to a diameter of nearly 17 meters (55 feet). It is the largest disk-gap-band parachute ever built and is shown here inflated in the test section with only about 3.8 meters (12.5 feet) of clearance to both the floor and ceiling.

The wind tunnel, which is 24 meters (80 feet) tall and 37 meters (120 feet) wide and big enough to house a Boeing 737, is part of the National Full-Scale Aerodynamics Complex, operated by the U.S. Air Force, Arnold Engineering Development Center.

NASA's Jet Propulsion Laboratory, Pasadena, California, is building and testing the Mars Science Laboratory spacecraft for launch in 2009. The mission will land a roving analytical laboratory on the surface of Mars in 2010. JPL is a division of the California Institute of Technology.