+ Figure A - High resolution: + Without annotation | + With annotation 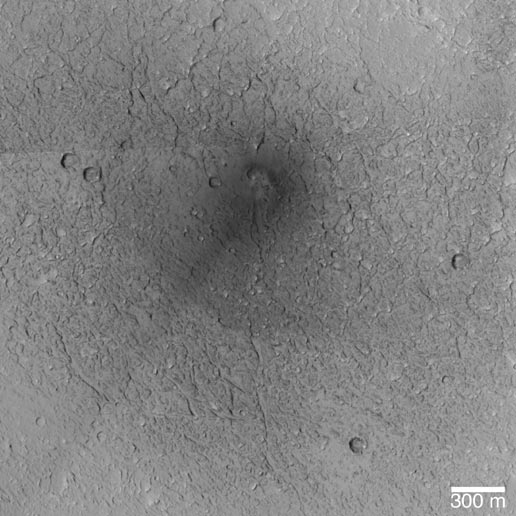 The Mars Global Surveyor's Mars Orbiter Camera has found that meteorites are hitting the Martian surface and forming new craters all the time. If you were living on Mars, chances are that within 10 or 20 years, an impact would occur close enough to where you live that you'd notice it -- perhaps you'd hear the impact and it would startle you out of your seat.

A year ago, it had not occurred to the camera team that they could find places on Mars where meteorites had impacted the surface during the course of the mission. Such craters, if they were forming at all, would be a few meters to a few tens of meters across; much too small to notice (or so they thought) in the wide-angle camera coverage. But, on Jan. 9, 2006, they began to realize that not only could we find such craters, we might also be able to characterize the present-day impact cratering rate on Mars. Surveying for fresh craters formed during the mission would provide the first direct observation--for any body in the solar system, including Earth and its Moon--of the present-day cratering rate. This in turn can help test models used all the time by members of the scientific community to estimate the age of features on planetary surfaces.

The first fresh impact site, shown on this page, was first noticed on Jan. 9, 2006, in an image acquired three days earlier. The image was acquired by the wide-angle camera at its highest possible spatial resolution, about 240 meters (262 yards) per pixel. To the northwest of the area imaged by the narrow-angle camera, the red, wide-angle context frame showed a dark spot. This spot was not present in any previous image acquired by any spacecraft, from Mariner 9 (which arrived in 1971) on down through Mars Express (which arrived in 2003).

Figure A: The first figure shows two red, wide-angle camera context images. The first was taken on June 9, 2001, several years before the impact occurred. The second is the “discovery” image, acquired on January 6, 2006. In both cases, a white box indicates the location of the Mars Orbiter Camera narrow-angle image for which the context image was obtained. For scale, the white boxes are 3 kilometers (1.9 miles) wide.

For more information about images from the Mars Orbiter Camera, see http://www.msss.com/mgs/moc/index.html .