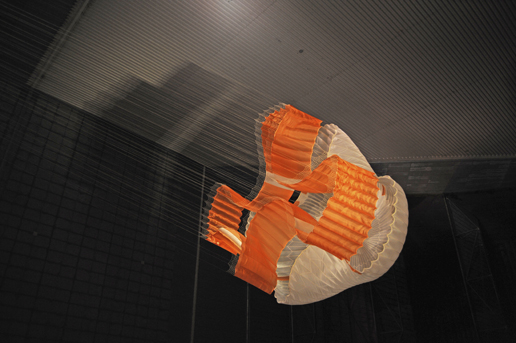 The parachute for NASA's Mars Science Laboratory mission, to be launched in 2011 and land on Mars in 2012, is the largest ever built to fly on an extraterrestrial mission.

This image shows the qualification-test parachute beginning to open a few seconds after it was launched from a mortar into an 80-mile-per-hour (36-meter-per-second) wind.

The parachute uses a configuration called disk-gap-band. It has 80 suspension lines, measures more than 50 meters (165 feet) in length, and opens to a diameter of nearly 16 meters (51 feet). Most of the orange and white fabric is nylon, though a small disk of heavier polyester is used near the vent in the apex of the canopy due to higher stresses there.