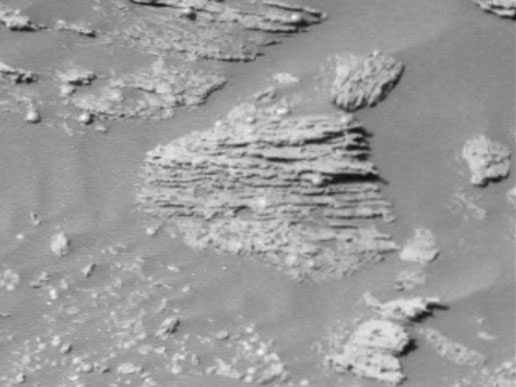 Scientists are excited to see new details of layered rocks in Opportunity Ledge. In previous panoramic camera images from the Opportunity rover, geologists saw that some rocks in the outcrop had thin layers, and images sent to Earth on sol 17 (Feb. 10, 2004) now show that the thin layers are not always parallel to each other like lines on notebook paper. Instead, if you look closely at this image from an angle, you will notice that the lines converge and diverge at low angles. These unparallel lines give unparalleled clues that some "moving current" such as volcanic flow, wind, or water formed these rocks.

These layers with converging and diverging lines are a significant discovery for scientists who are on route to rigorously test the water hypothesis. The main task for both rovers in coming weeks and months is to explore the areas around their landing sites for evidence in rocks and soils about whether those areas ever had environments that were watery and possibly suitable for sustaining life.