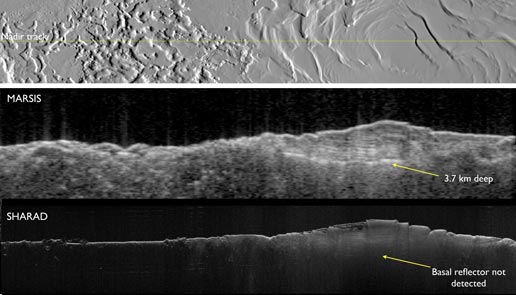 MARSIS was designed to penetrate deep and it has delivered on its promise. This figure shows the base of Mars' south polar layered deposits at the deepest recorded point of 3.7 kilometer (2.3 miles).

In contrast, SHARAD was designed as a high-resolution radar for a maximum penetration of 1 kilometer (0.6 mile) has difficulty detecting the base of these layered deposits.

MARSIS was funded by NASA and the Italian Space Agency and developed by the University of Rome, Italy, in partnership with NASA's Jet Propulsion Laboratory, Pasadena, Calif. Italy provided the instrument's digital processing system and integrated the parts. The University of Iowa, Iowa City, built the transmitter for the instrument, JPL built the receiver and Astro Aerospace, Carpinteria, Calif., built the antenna. JPL is a division of the California Institute of Technology in Pasadena. Additional information about Mars Express is at www.esa.int/marsexpress.

SHARAD was provided by the Italian Space Agency (ASI). Its operations are led by the University of Rome and its data are analyzed by a joint U.S.-Italian science team. JPL, a division of the California Institute of Technology, Pasadena, manages the Mars Reconnaissance Orbiter for the NASA Science Mission Directorate, Washington.

›  Larger view
›Back To Top