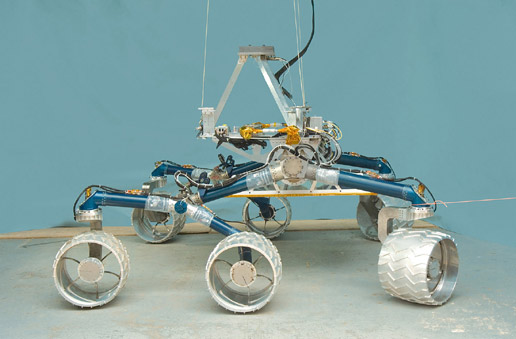 Image top: This engineering model of Mars Science Laboratory was dubbed "Scarecrow" by the mobility team, because it is still without a brain like the famous scarecrow from "The Wizard of Oz."

The 2009 Mars Science Laboratory, the mammoth grandchild of the 1997 Sojourner rover, is less than one year from the assembly, test and launch operations phase (ATLO). With its immense increase in size comes advanced abilities in power, technology and science data collection. In early 2008, the team will start the flight vehicle assembly and testing, simulating on earth every challenge the brave new traveler will face during the mission.

"We have moved from paper designs to real hardware and software," said Matt Wallace MSL Flight System Manager. "To name a few of the things that have happened lately: the first control and power electronics have been delivered to the testbed, our mobility and touchdown test vehicle is assembled and rolling, the initial versions of the software code for our guided precision landing are running and the landing engines were qualified for flight. MSL is a much more complex spacecraft than those we've sent before, so our assembly and testing is going to be really challenging."

Teams that represent every rover subsystem are working furiously to meet deadlines and overcome challenges to ensure that the most advanced rover to go to Mars will make its date with destiny.