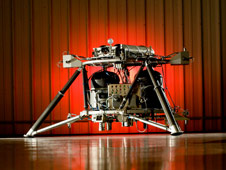 UPDATE, Nov. 8, 2011: The live ustream of the 100-foot robotic lander altitude test flight will not occur this week. Engineers are still reviewing data associated with the vehicle's propellant usage. For updates about the test flight, visit: http://www.nasa.gov/mission_pages/lunarquest/robotic/index.html.

NASA will conduct a 100-foot robotic lander altitude test flight Friday, Nov. 4, to mature the technology needed to develop a new generation of small, smart, versatile robotic landers capable of achieving scientific and exploration goals on the surface of the moon, asteroids or other airless bodies.

The test will begin between 10:30 - 11 a.m. CDT and will air live on NASA Television's Education Channel and the agency's Website. The outdoor test will occur at the U.S. Army's Redstone Test Center on Redstone Arsenal in Huntsville, Ala., and is weather dependant.

The lander prototype will perform an autonomous hover test, flying up to 100 feet and then translate, or move sideways, to perform a controlled, safe landing 30 feet away from the launch pad. The lander, dubbed Mighty Eagle, is fueled by 90 percent pure hydrogen peroxide and receives its commands from an onboard computer that activates its onboard thrusters to carry it to a controlled landing using a pre-programmed flight profile. This series of tests demonstrate the test article’s capability to perform an autonomous descent and landing and are being used to checkout landing control algorithms for the next generation of lander missions.

Journalists can attend the test or participate in a media telecon 45 minutes after the altitude test flight. Telecon participants will include Greg Chavers, lead systems engineer for the Robotic Lander Development Project at NASA's Marshall Space Flight Center in Huntsville, Ala., and Julie Bassler, project manager for the Robotic Lander Development Project at Marshall. To participate in the teleconference, journalists may call 800-857-0724 or 1-517-308-9438 and use the passcode robotic lander. Any inquiries prior to the teleconference should be sent to Kim Newton: Kimberly.D.Newton@nasa.gov. The project is managed by NASA's Science Mission Directorate in Washington.

To attend these events, reporters should contact Kim Newton, Marshall Public and Employee Communications Office at 256-544-0034 no later than 4 p.m. CDT Thursday, Nov. 3. Media representatives must report to the Redstone Visitor Center at Gate 9, Interstate 565 interchange at Rideout Road/Research Park Boulevard. Vehicles will be subjected to a security search at the gate. Journalists will need two photo identifications and proof of car insurance.


The test also will be webcast live via Ustream at: