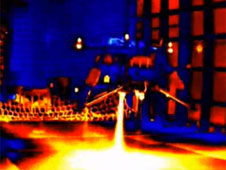 Infrared image of hover test of the robotic lander. (NASA/MSFC) On Monday, June 13, the robotic lander mission team was poised and ready when the lander prototype in the adjacent building lifted itself off the ground and rose -- unrestrained -- higher and higher. Applause broke out in the control room when the lander gently sat back down. This marks the first free flight of this prototype for the Robotic Lander Development Project managed at NASA's Marshall Space Flight Center in Huntsville, Ala.

The robotic lander successfully flew up to 7 feet for 27 seconds, proving it can execute commands autonomously, such as hover for an extended period, control its position and orientation and land successfully. More free flight tests are planned that could potentially take the lander up to 100 feet and last up to 60 seconds. These tests will aid in the design and development of a new generation of small, smart, versatile robotic landers capable of performing science and exploration research on the surface of the moon or other airless bodies, including near-Earth asteroids.

In a previous test held on Wednesday, June 8, the lander hovered autonomously for 15 seconds at 1.5 feet and executed a “Land Now” abort command to prove the lander's ability to safely abort mid-flight in case of an emergency

The prototype provides a platform to develop and test algorithms, sensors, avionics, software, landing legs, and integrated system elements to support autonomous landings on airless bodies, where aero-braking and parachutes are not options. The test program furthers NASA’s capability to conduct science and exploration activities on airless bodies in the solar system.

Development and integration of the lander prototype is a cooperative endeavor led by the Robotic Lander Development Project at the Marshall Center, Johns Hopkins Applied Physics Laboratory and the Von Braun Center for Science and Innovation, which includes the Science Applications International Corporation, Dynetics Corp., Teledyne Brown Engineering Inc., and Millennium Engineering and Integration Company, all of Huntsville.

The project is partnered with the U.S. Army’s Test and Evaluation Command’s test center located at Redstone Arsenal. Redstone Test Center is one of six centers under the U.S. Army Test and Evaluation Command and has been a leading test facility for defense systems since the 1950’s. Utilizing an historic test site at the Arsenal, the project is leveraging the Redstone Test Center’s advanced capability for propulsion testing.