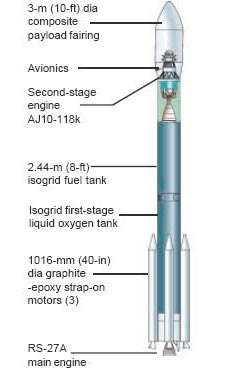 Image above: Illustration of a Delta II rocket. Depending on the payload, the size of the fairing can vary, as can the number of strap-on motors, from three, four or nine. Image credit: The Boeing Company

Avionics - The avionics is the electrical "brain" of the rocket. Avionics are electrical systems that control the rocket during flight.

RS-27A Engine - This is the first-stage engine, or main engine, that begins operation at liftoff. Along with the solid rocket motors, it is used to carry the rocket to a predetermined altitude. When it reaches that altitude, the main engine shuts down, allowing the first stage to separate and the second stage engine to ignite. The main engine uses a mixture of liquid oxygen and RP-1 fuel.

Isogrid Fuel Tank - The first-stage fuel tank is the structure containing RP-1, the fuel that is mixed with liquid oxygen, or LOX, to run the main engine. Isogrid is a description of the internal part of the tank.

Isogrid First-Stage Liquid Oxygen Tank - The first-stage liquid oxygen, or LOX, tank is the structure containing the oxidizer, which is mixed with fuel to run the main engine. Isogrid is a description of the internal part of the tank.

Graphite Epoxy Motors (GEM) - The graphite epoxy motors are the solid rocket motors attached to the first stage. Along with the main engine, these motors help propel the rocket into space. When nine motors are used, six are started at liftoff. When those run out of solid propellant they are jettisoned from the rocket, and at the same time the remaining three motors ignite to get the rocket to its predetermined altitude. They are called graphite epoxy motors because that is the material used to build the motor casings. The motors are lighter and stronger than aluminum.

Composite Payload Fairing - The payload fairing is used to encapsulate, or surround, the spacecraft to protect it from temperature, humidity, contamination and wind as the rocket climbs toward orbit. The fairing is released at the fringes of Earth's atmosphere to expose the spacecraft to space as it nears orbit. Composite is a description of the material used to build the fairing.