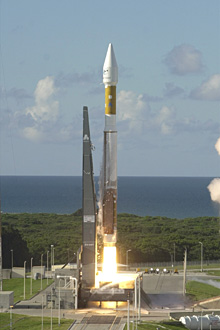 Atlas rockets have evolved over four decades to become a highly reliable launch vehicle. The Atlas V booster family now provides a variety of vehicles capable of launching a wide range of spacecraft and satellites.

The Centaur upper stage uses pressure-stabilized propellant tank design for efficiency. Centaur engines can start and re-start multiple times in space, enabling insertion of a spacecraft into a low Earth parking orbit, followed by a coast period and finally, insertion into geosynchronous transfer orbit. They're also capable of direct insertion into an inter-planetary trajectory.

Through the NASA launch blog, you can share in the excitement of each new launch with live coverage directly to your computer via the Web. Coverage usually begins two hours prior to liftoff, and you can use the countdown events below to track the prelaunch milestones and learn about the Atlas V countdown process.

Here are some countdown milestones and key events that take place after the countdown begins. Keep in mind that event times and lengths are approximate and subject to change. 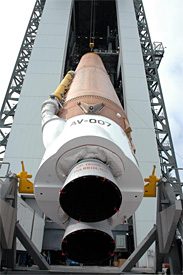 Image to right: In preparation for NASA's Mars Reconnaissance Orbiter mission, the first stage of the Atlas V rocket is raised to a vertical position for lifting into the launch service tower and mated with the second stage, the Centaur. Image credit: NASA/KSC