Special Delivery: The Pegasus XL Rocket
The Pegasus XL was developed as an inexpensive way of launching small payloads into space. The rocket specializes in carrying satellites and experiments that weigh up to 1,000 pounds into low-Earth orbit. With the body of an oversize model rocket and tail of an airplane, the Pegasus has three solid-fuel rocket motors and a rather unique and economical way of lifting off. 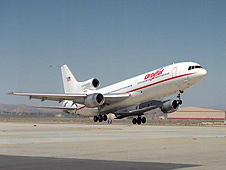 Image above: The "Stargazer" L-1011 carries the Pegasus rocket to an altitude of 39,000 feet before releasing it. Photo credit: NASA

Pegasus' first leap into space is actually aboard Orbital Science's L-1011 "Stargazer" jet. The Pegasus starts its mission secured to the belly of the L-1011, where it's carried to the planned launch altitude. Using the Stargazer again and again saves money by eliminating the need for a stage motor to lift each Pegasus off of the ground.

The Stargazer began life as an Air Canada passenger jet before it was whisked off to Cambridge, England, for conversion into a flying launch pad. While in England, the jet's seats were removed, its wings reinforced and the Pegasus' launch systems installed. One of Pegasus' greatest benefits is its ability to be launched from practically anywhere in the world. With a conventional rocket, the launch has to take place from wherever the assembly and launch facilities are located.

However, in the case of Pegasus, the launch can take place from either its home base in Vandenberg, Calif., or from a number of other possible sites. If another location is desired, the rocket can be partially or completely assembled in California and flown to the launch site. 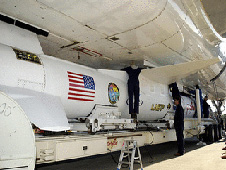 Image above: The Pegasus rocket is secured to the hull of the L-1011 and fueled before takeoff. Photo credit: NASA

Every Pegasus flight starts with the rocket locked to the underside of the Stargazer. The jet takes off and requires about one hour to fly to the rocket's launch altitude of 39,000 feet. At that height, the Pegasus is released and allowed to freefall for about five seconds.

Nearly 10 minutes later, the Pegasus has exhausted its stage two and three motors, reached a top speed of nearly 17,000 mph, and climbed to an altitude of 460 miles. Following the boost phase of the flight, the spacecraft separates from the Pegasus and glides off to begin its mission.