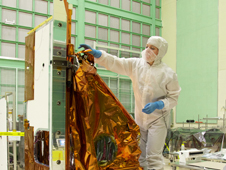 Aleksandra Bogunovic reaches across the instrument to affix the corners of a Multi-Layer Insulation blanket to the TIRS instrument. The Thermal Infrared Sensor (TIRS) will fly on the next Landsat satellite, the Landsat Data Continuity Mission (LDCM). TIRS was built on an accelerated schedule at NASA's Goddard Space Flight Center, Greenbelt, Md., and will now be integrated into the LDCM spacecraft at Orbital Science Corp. in Gilbert, Ariz. (Credit: NASA Goddard/Rebecca Roth)
› Larger image

A new NASA satellite instrument that makes a quantum leap forward in detector technology has arrived at Orbital Sciences Corp. in Gilbert, Ariz. There it will be integrated into the next Landsat satellite, the Landsat Data Continuity Mission (LDCM).

The Thermal Infrared Sensor (TIRS) will take the Earth's temperature with a new technology that applies quantum physics to detect heat. The engineering team at NASA's Goddard Space Flight Center in Greenbelt, Md., completed TIRS on an accelerated schedule, going from plans on paper to building the instrument in an unprecedented 43 months. "That's a full year ahead of a typical schedule for a new space borne instrument," says Betsy Forsbacka, TIRS instrument manager.

"Two things made this remarkable achievement possible," says James Irons, LDCM project scientist. "The dedication of the TIRS team working nearly around-the-clock and the use of advanced detector arrays we had on-hand because Goddard played a major role in developing the technology. TIRS will be the first time this technology is used in space."

TIRS uses Quantum Well Infrared Photodetectors (QWIPs) to detect long wavelengths of light emitted by the Earth with an intensity depending on surface temperature. These wavelengths, called thermal infrared, are well beyond the range of human vision and while devices for thermal infrared night 'vision' have long been available, QWIPs offered a new lower-cost alternative to conventional infrared technology. QWIPs arrays are designed for sensitivity to specific wavelengths.

The QWIPs design operates on the complex principles of quantum mechanics. Gallium arsenide semiconductor chips trap electrons in an energy state 'well' until the electrons are elevated to a higher state by thermal infrared light of a certain wavelength. The elevated electrons create an electrical signal that can be read out and recorded to create a digital image. The QWIPs TIRS uses are sensitive to two thermal infrared wavelength bands, helping it separate the temperature of the Earth's surface from that of the atmosphere.


TIRS was added to the satellite mission when it became clear that state water resource managers rely on the highly accurate measurements of Earth's thermal energy obtained by NASA satellites like LDCM's predecessors, Landsat 5 and Landsat 7, to track how land and water are being used.

"For example, irrigated fields are cooler than those suffering from a lack of moisture," says Veronica Otero, TIRS thermal engineer.

With nearly 80 percent of the fresh water in the Western U.S. being used to irrigate crops, TIRS will become an invaluable tool for managing water consumption, says Rick Allen, director of water resources research at the University of Idaho, in Kimberly, Idaho.

LDCM is scheduled to launch in January 2013 from Vandenberg Air Force Base in California. Aboard LDCM are two instruments, TIRS and an imaging sensor called the Operational Land Imager (OLI) built by Ball Aerospace & Technologies Corp., Boulder, Colo. OLI collects data in the visible, near infrared and short wave infrared spectrum.

LDCM is the eighth satellite in the Landsat series, which began in 1972 with the launch of Landsat 1, and extends the world's longest-running satellite program for global land observations. NASA and the U.S. Department of the Interior through the U.S. Geological Survey (USGS) jointly manage Landsat and the USGS preserves a 40-year archive of Landsat images with free distribution of data over the Internet.

Because of this freely available data of more than three million current and archived images of Earth, Landsat data is the basis for thousands of university research papers, the foundation for commercial innovations like Google Earth, and a cornerstone of U.S. space cooperation with foreign nations. More than 20 nations on six continents operate local receiving stations for Landsat data.