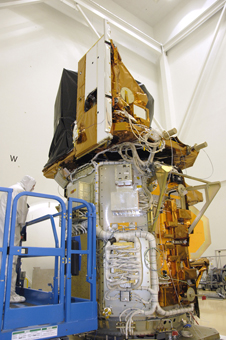 Engineers at Orbital Sciences Corporation, Gilbert, Ariz., have installed the Thermal Infrared Sensor (TIRS) instrument back onto to the Landsat Data Continuity Mission (LDCM) spacecraft. With both the Operational Land Imager (OLI) and TIRS instruments now on the spacecraft, LDCM is a complete observatory.

After the TIRS instrument was shipped to Orbital in February, engineers discovered that helium had leaked from the TIRS cryogenic cooler. The cooler keeps the detectors extremely cold, which is required for the instrument to detect thermal infrared radiation emitted from Earth. The leak was quickly repaired, the cooler was re-pressurized with helium, and TIRS was re-installed onto the instrument deck of the spacecraft. Once the TIRS instrument is electrically connected later this month, TIRS will be ready to begin environmental testing with the rest of the observatory.

The engineering team at NASA's Goddard Space Flight Center in Greenbelt, Md., built TIRS on an accelerated schedule, going from a design on paper to a completed instrument in 43 months. An instrument of this type usually takes another year to complete.

Under contract to NASA, Orbital is responsible for providing the spacecraft bus, installing the science instruments and performing system-level integration and testing of the Observatory prior to launch. Ball Aerospace & Technologies Corp. built the OLI. The USGS developed the LDCM ground system.