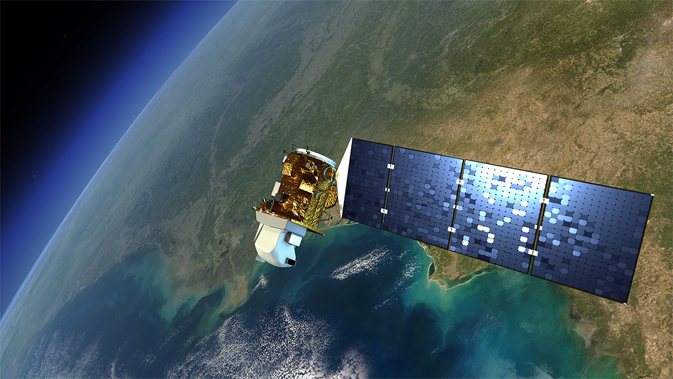 An artist's rendition of the next Landsat satellite, the Landsat Data Continuity Mission (LDCM) that will launch in Feb. 2013. Credit: NASA
› Larger image

The Landsat program is the longest continuous global record of Earth observations from space – ever. Since its first satellite went up in the summer of 1972, Landsat has been looking at our planet. The view of Earth that this 40-year satellite program has recorded allows scientists to see, in ways they never imagined, how the Earth's surface has transformed, over time.

In the 1970s Landsat captured the first views from space of the Amazonian rainforest and continued to track the area year after year after year, giving the world an unprecedented view of systemic and rapid deforestation. This view from space let us see an activity that was taking place in an exceptionally remote part of our world. These now iconic-images of tropical deforestation spurred the global environmental community to rally in an unprecedented way, and resulted in worldwide attention and action. 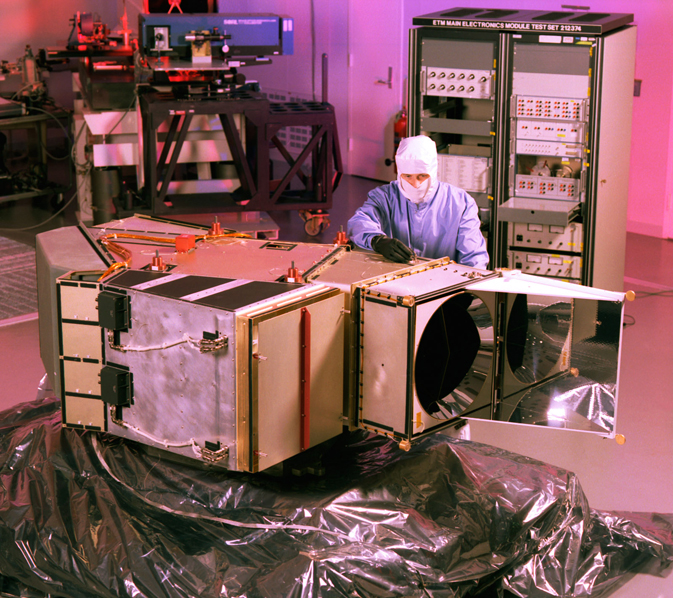 The Enhanced Thermal Mapper instrument that flew aboard Landsat 7 in the cleanroom. Credit: NASA
› Larger image

Antarctica is arguably the most hostile and remote landscape on Earth. Researchers studying the snow, ice, wildlife and weather near the South Pole face exceptional difficulties. Even gathering the most basic data like wind speeds and temperatures push the limits of human endurance. Landsat's view from space as it flies over Antarctica 16 times a day is the first ever large-scale true-color map of this continent. Scientists have used it for everything from tracking climate change's effects on glaciers to finding new colonies of penguins.

In the 1970s, just after the launch of the first Landsat satellite, scientists working on the Large Area Crop Inventory Experiment wanted to see if they could tell which plants were being grown and where. The project demonstrated that crops could be monitored worldwide from space, and in 1979 it was used to assess total yield of the Soviet wheat crop before the harvest. Remarkably these estimates came within 90 percent of official Soviet figures released months after the harvest, proving the validity of satellite crop monitoring and providing information for use in worldwide food estimates, government policies and international trading decisions.

NASA and the U.S. Department of the Interior through the U.S. Geological Survey (USGS) jointly manage the Landsat program with NASA building and launching the satellites and the USGS preserving and distributing an archive of more than three million Landsat images to people in over 180 nations and territories. Together they continue an unprecedented and continuous view of the transformations on Earth's surface, year after year after year.

Landsat looks, and the world sees.

One Photo Began It 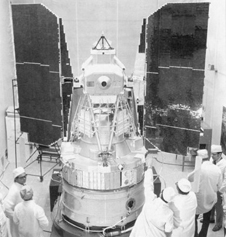 The first Landsat satellite - ERTS-1 Credit: NASA
› Larger image Landsat was inspired by the photos taken of Earth from space by the first astronauts. The most famous was the "blue marble," a photo of Earth hanging alone in a field of infinite black. But it was a different photo taken from space that caught the eye of Stewart Udall, secretary of the Interior in the Kennedy and Johnson administrations. This photo captured the pollution spewing from power plants in the Four Corners area of his home state of Arizona.

Udall had known there was pollution, but seeing it unambiguously from space was an entirely different matter. Clearly, orbiting satellites provided a new way to look at our home planet. Udall urged the Johnson administration to create a program of Earth-observing satellites. A joint effort between the Department of Interior and NASA began, ultimately producing the Earth Resources Technology Satellite (ERTS) program.

"It seemed obvious that ERTS was a kind of awkward thing to say," NASA's director of Earth Observation Programs, William Stoney in the 70s told the "Landsat Legacy Project" in 2005. Thus, the ERTS-1 satellite was rechristened Landsat 1 and the Landsat family grew with the launches of Landsat 2 in 1975 and Landsat 3 in 1978.

In 1979, President Jimmy Carter laid the groundwork to transfer the Landsat program to the National Oceanic and Atmospheric Administration (NOAA) and transition it from a research program to an operational one. Landsat 4 was launched in 1982 and Landsat 5 in 1984 -- the same year that Congress passed a law commercializing the program. A year later the newly-created Earth Observation Satellite Company (EOSAT), took over the operations of Landsats 4 and 5 after a lengthy bidding process.

However, commercialization proved unworkable and the Landsat program suffered.

Cost recovery forced NOAA to dramatically raise Landsat data prices, nearly 600 percent for some products. So EOSAT took over in an environment where the prices for Landsat images had driven away all but the largest customers, such as the military and oil and mining companies. In addition, during the EOSAT tenure, image acquisitions became customer-driven, resulting in limited global coverage and thus the utility of the data collection declined. In 1989, funding shortages forced NOAA to order EOSAT to turn off the two remaining satellites. Funds contributed by other agencies kept the satellites operational, because a successor satellite, Landsat 6, failed at launch in 1993.

In 1992, Congress passed the Land Remote Sensing Policy Act, which returned operation of the program to the government with instructions to build and launch Landsat 7, which happened in 1999.

The Landsat legacy as a "workhorse" satellite that began with Landsat 2's long life continued with Landsats 5 and 7, both remaining operational well beyond their design lives. Landsat 5 returned data for 28 years, and even though there's been a technical issue with its imagery, Landsat 7 is still in operation 13 years after its launch. The eighth satellite in the Landsat fleet, dubbed the Landsat Data Continuity Mission, will launch in 2013, not a moment too soon for all the millions of users relying on Landsat 7.

Since 2008, all the data in the USGS archive captured from the Landsat satellites are distributed by the USGS to users over the Internet for free, and as a direct result, data usage has exploded. Now well over three million images are in the Landsat archives, and more imagery is added every day. 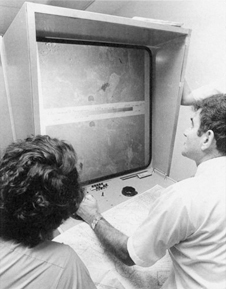 Scientists in 1972 viewing a Landsat enlargement on a special machine in the control center. Now Landsat data is available to everyone with an Internet connection, for free. Credit: NASA
› Larger image The original plan for Landsat 1 was to rely on special television cameras called "return beam vidicons," (RBV) to do the imaging. But while the satellite was being designed Hughes Aircraft came up with a scanner that imaged the Earth in strips. The new scanner had a moving part, an oscillating mirror. Many scientists were leery of moving parts on a satellite, plus they weren't happy with having the images in strips. But the scanner had a wider range of wavebands than the RBV. For instance, one band could sense chlorophyll absorption, another water content of leaves, a third one could detect moisture in the soil -- all valuable things to record if you were studying the vegetation-soil system. The Hughes scanner for Landsat was a four-band multispectral scanner (MSS) and used the then-relatively new technology of fiber optics.

Although many scientists remained skeptical about the MSS instrument, it was included aboard Landsat 1. Almost immediately the concerns disappeared, because even the first MSS images showed jaw-dropping beauty and detail. To make the MSS victory complete, the RVB malfunctioned and was shut down while the MSS kept sending astounding images.

For Landsats 4 and 5, NASA added the Thematic Mapper (TM) instrument to fly along with the MSS sensor on each satellite. The TM instruments acquired imagery with even better spatial resolution than the MSS, and in three more spectral bands.

The next sensor improvement came with Landsat 7 with an eight-band enhanced version of the thematic mapper (ETM+). Unfortunately, the scanner malfunctioned in 2003, and 22 percent of each scene is lost, but new data blending techniques have helped to work around the data loss and Landsat 7 is still collecting global data sets and still being used extensively. 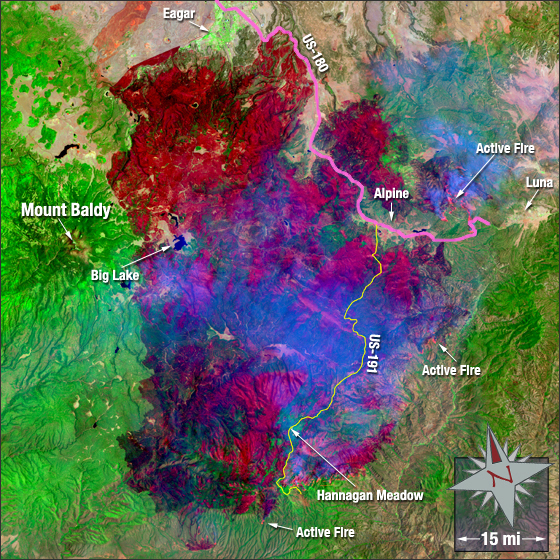 A Landsat 5 image of the Wallow Fire, the largest wildfire in Arizona's history. In this image, acquired on June 15, 2011 the burn scar is red, ongoing fires are very bright red, smoke is blue, water is black and dark blue and bare ground is tan.
› Larger image

Perhaps the greatest contribution of Landsat is the ability to understand how the Earth's land surface is changing through time.

A snapshot shows you only what is true for that split-second. Showing what is happening over decades is different. Time is part of the scaffold of science.

Landsat builds and adds to its archive of data as its satellites continue to record information about the world every day. These times series of data provide insight into things like the retreat of glaciers in Alaska or the state of crops in California or volcano hot spots in Yellowstone, all in ways never possible before.

Landsat is the oldest and most ubiquitous of all Earth-observing satellite systems. Its images are even available on Google Earth, visible to millions every day on their computers or smartphones.

Landsat images track natural and human-made disasters, like the damage to the Gulf Coast from Hurricane Katrina, the tsunami in Japan, a tornado in Massachusetts, or forest fires in Arizona. The data help governments track the effects of the incident, develop recovery efforts and even help determine what areas of our world may be threatened by future hazardous events.

Worldwide, Landsat can monitor the effects of a changing climate: the appearance and disappearance of barrier islands, the melting glaciers in Greenland and the Antarctic, rising sea levels, changes in forests at high latitudes, and the erosion of coastlines in Alaska. Landsat has measured the use of scarce water resources in the American West, and helped people plan urban growth.

And so it was that Landsat, over the years, found mining and pollution in Peru few had noticed before.

With the price of gold skyrocketing, up to 360 percent in the last 10 years, unlicensed miners began pouring into the Madre de Dios area in Peru just north of the Bolivian border. They cleared an area equal to four-and-a-half football fields a day to make room for mines in two areas. As a result, 12,500 acres of forest were destroyed from 2003 to 2009.

Landsat images from each of these years show that the deforestation increased at a rate of 26 percent a year, according to Jennifer Swenson of Duke University, Durham, N.C. It was an odd place for deforestation, so teams of scientists went into the area to see what was happening. What they found wasn't just deforestation and species loss, but a health risk no one anticipated.

Miners bring mercury to their mining sites and use it to extract gold from the rocks. During the process, the mercury vaporizes, becoming airborne and finds its way into the water supply. Biologists found that the fish in the area had exceptionally high levels of mercury in their flesh and the local people were being poisoned, not only by eating the tainted fish, but also possibly through direct exposure because tests of locks of the hair of local residents showed that the closer they were to the mines, the more mercury in their bodies.

Scientists continue to track the mining using Landsat data. Ecologists are using their research and the Landsat images to call for action by the Peruvian government.

Landsat looked and the world saw a health crisis years before it would have otherwise been discovered.

The data-rich USGS archive built from the Landsat satellites since 1972, with more than three million images, represents the surface of Earth over a 40-year period, a story of our physical world unparalleled in the history of science.

It is practical science, knowledge of things we need to watch for, to be warned of; information to help us do things better, to find a way of accommodating seven billion people on one small planet. It describes over two generations, the human impact on Earth, and the impact of Earth on humanity.