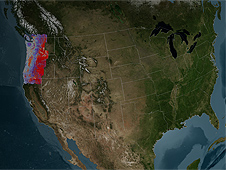 › View larger
This imagery covers lands managed by the U.S. Forest Service in Washington state, Oregon and northern California. Credit: Goddard's Scientific Visualization Studio A new way of studying and visualizing Earth science data from a NASA and U.S. Geological Survey satellite program is resulting in, for the first time, the ability to tease out the small events that can cause big changes in an ecosystem.

Called LandTrendr, this computer program is able to find patterns previously buried within vast amounts of scientific data. Still in development, it's already led to seeing for the first time in satellite imagery an obscured, slow-moving decline and recovery of trees in Pacific Northwest forests.

Comparing satellite data to ground data, scientists uncovered the cause. "It was, as it turns out, bugs," says Robert Kennedy, a remote sensing specialist at Boston University, who consulted with U.S. Forest Service experts to confirm his observations.

The unexpected disturbance pattern showed a long slow decline of tree health over years followed by slow regrowth. It emerged in several areas, particularly near Mount Hood in the 1980s, peaking in 1992 when regrowth began, and near Mount Rainier where the insect outbreak lasted ten years from its onset in 1994 till the insects killed all the trees and moved on in 2004.

Kennedy says that LandTrendr works because of the unique nature of Landsat data. The data embedded in images are a scientific record of the Earth's surface that goes back 40 years. Each image, or scene, covers an area 115 miles by 112 miles (185 kilometers by 180 kilometers) and provides data for wavelengths of light reflected or emitted from the Earth's surface, which scientists use to see, for example, forest conditions not apparent in visible light. With the four-decade record, they can compare images between years and see how the land changes with time. 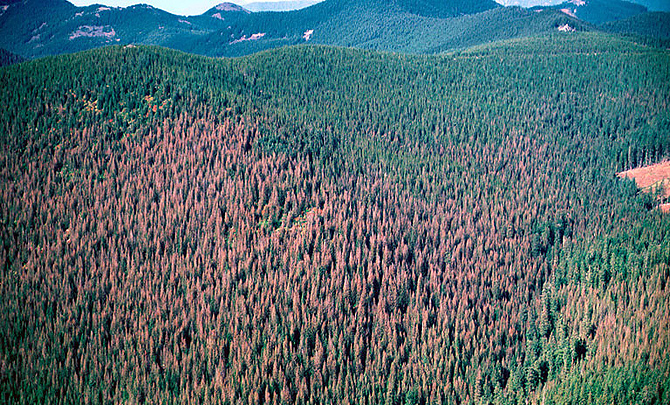 Studying big areas over many years means handling big data sets and figuring out how to get all the data to work together for meaningful comparisons. One challenge in particular is finding images from the same time of year where the view of the ground is not hidden by clouds.

Kennedy's breakthrough was to combine cloud-free pixels from multiple scenes of the same area collected over the growing season in late summer. Then he compares the new images for each year to one another. By breaking a scene down into smaller sized pixels, the cloud-covered portions could be tossed away, but LandTrendr keeps the clean bits to reveal the life history of each pixel.

"We're getting better data use out of what people think of as crummier images," says Curtis Woodcock, a remote sensing specialist at Boston University who employs a similar method to Kennedy to build an image of the landscape out of Landsat data pixel by pixel.

What makes all this possible are two things: Computers are finally powerful enough to process vast amounts of data, and Landsat data is now available free of charge.

› View larger
Western spruce budworms are inactive in the winter and feed on needles of coniferous trees as mature larvae beginning in May or June. In July and August, they pupate into adult moths. Credit: Scott Tunnock, USDA Forest Service, Bugwood.org
Source: http://www.forestryimages.org/browse/detail.cfm?imgnum=1241552
Image Policy: http://www.forestryimages.org/about/imageusage.cfm 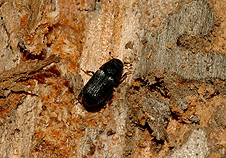 › View larger
Mountain pine beetles bore into trees to lay their eggs under the bark. They introduce a fungus that prevents the tree from defending against the attack and stops water and nutrient transport within the tree. Credit: William M. Ciesla, Forest Health Management International, Bugwood.org
Source: http://www.forestryimages.org/browse/detail.cfm?imgnum=5466820
Image Policy: http://www.forestryimages.org/about/imageusage.cfm The Landsat program has been observing Earth's land surfaces consistently since 1972, when the first Landsat satellite, what became known as Landsat 1, went into orbit. Since then, it has compiled the longest continuous satellite record of change across our planet. But a left over pay-for-data policy from the commercialization of the program in the 1980s and 90s meant scientists rarely looked at the year-by-year evolution of a landscape. When the USGS began providing Landsat data for no charge in 2008, looking at twenty-five years or more of data became affordable as long as you had the computing power to handle it.

"Not that long ago the size of an individual Landsat scene would have crippled most desk top computers," says Doug Morton, a physical scientist at NASA's Goddard Space Flight Center in Greenbelt Md., who uses Landsat to study changes in the Amazon and forests in Indonesia. Now with processing power doubled or more, he says, it's no problem for most desktop machines to handle a big scientific job.

When Kennedy first saw a yearly succession of moderate resolution Landsat satellite images of a 13,000 square mile area near Portland, Ore., it was a revelation. Says Kennedy, it was like looking at a pair of air photos of a forested hillside offset so that with special glasses, the image pops into three dimensional clarity. "You sort of squint your eyes and it takes a while and all of a sudden you get that moment -- boom! Oh, my god, it's a landscape!" he says. "I had that same sense [of amazement ] when I first started looking at the time series stuff."

The ability to scroll backward and forward through time and Kennedy's new technique for creating single visualizations out of millions of bits of data from hundreds of Landsat images has revealed not just the patchwork of fire scars and clear cuts -- what he was originally looking for when he partnered with the Forest Service -- but also the slow and subtle changes that take place over many years, including pulses of insect outbreaks.

"We did not expect that," says Kennedy. In the satellite imagery they had found two kinds of insect signals. The first is a classic mountain pine beetle outbreak. One near the Three Sisters volcanoes in Oregon started in the late 1990s and early 2000s. The beetles attacked lodge pole pines, the same species affected in outbreaks throughout British Columbia and Colorado.

The second, subtler signal found near Mount Hood and Mount Rainier is the western spruce budworm, an insect that moves into an area and eats the needles off the trees. Losing its green growth doesn't necessarily kill the tree, but it does put it under a lot of stress. If budworms return in following years, trees will ultimately succumb to the onslaught and die. Then the budworms, out of food, move on. And the forest gradually recovers.

Kennedy says to confirm the satellite data, they hiked into areas with recent known budworm outbreaks near Mount Rainier. With the decline and regrowth patterns from the new maps in hand, Kennedy says, "we stand out on the ground in the forest and look at all the dead trees and we realize that we're actually starting to see something that we had never been able to see before from space. It was very exciting."


The imagery produced by LandTrendr is a remarkable tool for looking at change over time, says Woodcock. But what he really wants to see is a move from the retrospective to the real time. He says, "The goal in the long run is to be able to provide land managers information on what's happening as it's happening." It's a process, he says, that's just getting started.

"That ability to read the story of the landscape is something that the Landsat archive allows us to do like none other," says Doug Morton of NASA Goddard. NASA and the USGS will continue providing the means to see it with the next satellite in the Landsat series, to be called Landsat 8, scheduled to launch in early 2013.

To learn more about the Landsat program, visit: