Yellowstone National Park—the world’s first national park created in 1872—was transformed into an apparent wasteland during the three months of summer 1988 when it seemed that its beauty, and carefully legislated and shepherded legacy, would all go up in smoke.

Eyewitnesses described mushroom clouds roiling above the trees. The fires kept growing until they doubled in size. What weather created—historic drought that produced the conditions, which allowed fire to thrive—only weather could quell. Despite the efforts of 25,000 people fighting the fire, at a cost of $120 million—the largest fire-fighting effort in United States history up to that time—it was not until rain and snow began to fall on September 11 that the fires' rampage through the Yellowstone area was stopped. 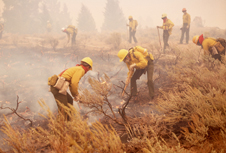 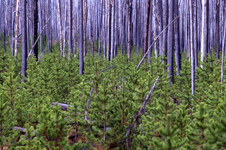 Why did these fires burn on such a massive scale? A look at the Landsat images provides a significant clue. In the first image of the sequence, from 1987 before the fires started, a very obvious vertical line can be seen near the left edge of the frame. That left edge represents a real boundary on the landscape that is the result human activities and land management policies.

To the left (west) of the park boundary, land has been managed for multiple purposes, including clear-cutting of forests for timber production. To the right of the boundary, the park has been managed for preservation. The dark green represents thick forests that were protected from logging, but also, according to earlier philosophies of management that prevailed over much of the twentieth century, protected from fire. Decades of fire suppression, historic drought and a significant number of lightning strikes created the conditions that allowed the massive conflagration that, when all was said and done, burned or scorched nearly 2 million acres.

Though people fear it, fire is a human disaster, not an ecological one. Fire—even one as intense and widespread as the one that burned the Yellowstone area in 1988—is a natural process. Ecosystems will, given time, recover.

In the recent satellite era, Landsat images have contributed to the field of fire science, helping researchers understand fire danger, wildfire behavior, and the effects of wildfire on a landscape. Satellite data has become a tool for identifying different fuels, such as grasses, shrubs, and trees, which burn at different temperatures and are consumed by fire at different speeds, and whether they are lush or tinder dry. Knowing what is on the landscape can help managers anticipate a slow, creeping fire, a fast-racing grass fire, or an intense, crown fire that torches trees.

Satellite imagery also aids scientists' understanding of how the land recovers. Able to capture reflected light characteristic of charred areas, shown in red in the time-lapse animation above, Landsat has shown scientists where grasses and saplings are growing on the burn scars of the 1988 fires.

"The fires profoundly affected the ecology of the park, and still to this day, as you can see in the images, the imprint of the fire remains. The recovery is certainly going to take decades if not centuries to actually occur," says NASA Landsat project scientist Jeff Masek at NASA's Goddard Space Flight Center in Greenbelt, Md.