Most of the geologic processes that shape our planet, such as the creeping movement of tectonic plates, are often too slow to see on human timescales, but every so often, geology produces a moment with in-your-face intensity.

The explosive eruption of Mount St. Helens in Washington State on May 18, 1980, was such a moment. Situated on a subduction zone where the Juan de Fuca Plate in the Pacific descends under the North American Plate, Mount St. Helens is one of a number of Cascade Range volcanoes that stretch from British Columbia to northern California. The peak is the most active volcano of the group, sitting over an area where the Earth's surface holds in the melted solid rock.

Landsats 2, 3, 5 and 7 captured the Mount St. Helens eruption and subsequent recovery of its surrounding ecosystem over the last 32 years. The scenes collected by Landsat 2 and 3 from 1980 to 1983 show vegetation in red. Natural color images appear with the launch of the new Thermal Mapper instrument on Landsat 5 in 1984 and continued with Landsat 7.

The first three seconds of the visualization depict the condition of the volcano prior to the morning of May 18. It has a conical, glacier-clad peak like the others in the Cascades chain and had been inactive since the mid-nineteenth century. Scientists began actively monitoring Mount St. Helens in March 1980 when the volcano "reawakened" with a 4.2-magnitude earthquake and started venting steam.

On the morning of the now-historic eruption, a 5.2-magnitude earthquake triggered the sequence of events that would be life altering to many in the area. A massive slab of the northern slope of Mount St. Helens collapsed and roared over the landscape in an enormous debris avalanche—the largest in recorded history. With a gigantic hole ripped down the volcano’s side, superheated gases and rock fragments exploded laterally instead of vertically—something that had not been witnessed and recorded before in modern times.

The blast raged with wind speeds reaching 200 to 250 miles per hour (320 to 400 kilometers per hour) at temperatures of 680˚F (360˚C), flattening and scorching trees. For more than nine hours after the lateral blast, Mount St. Helens gushed an ash plume that reached 15 miles high into the atmosphere, and in 15 days, circled the globe. Deadly pyroclastic flows, at least 1,300˚F (704˚C), spewed from the crater and covered 6 square miles (15 square kilometers) under feet of choking pumice. 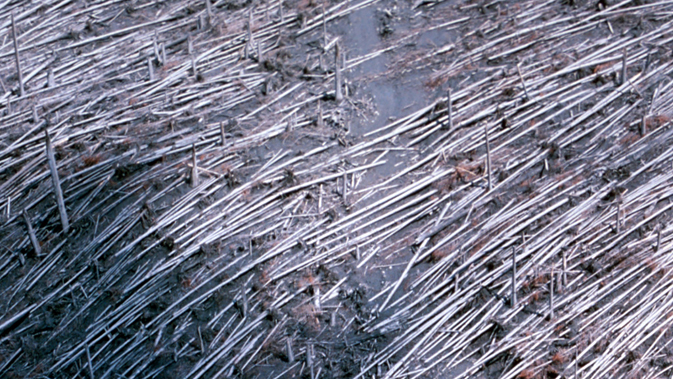 This photograph of downed trees was taken on June 8, 1980, a few weeks after the eruption. The blast flattened or damaged enough timber to build 150,000 homes. (Credit: USGS/J.G. Rosenbaum)
› Larger image

The summit and northern slope were obliterated. The surrounding forest ecosystem was wiped out: trees burned, flattened or simply gone. Churning mudflows poured down the Toutle River, which was filled with trees, mud, boulders. When the roiling flow reached the Columbia River, it blocked the shipping channel. In the video, the two squiggly lines that grow fat on the left side were the two forks of the Toutle River choked with debris.

Fifty-seven people died in the immediate aftermath of the eruption, according to officials in local Cowlitz County, Wash., including David Johnston, the U.S. Geological Survey geologist who had been monitoring the volcano from the ridge that now bears his name, five miles north of the volcano. 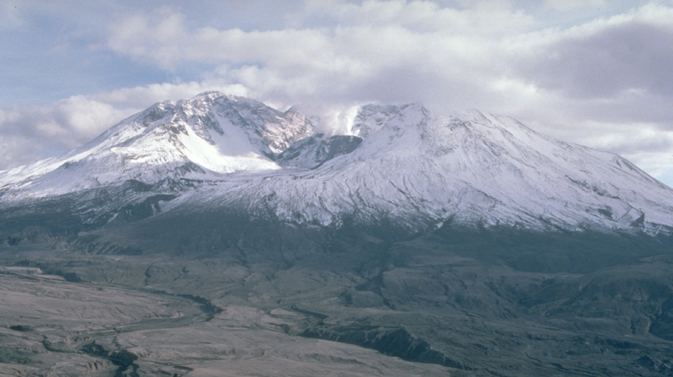 Taken from Johnston Ridge on Sept. 24, 1984, four years after the eruption, the north face of Mount St. Helens is where the lateral eruption blasted out the side of the mountain. A new lava dome is visible growing inside. (Credit: USGS/Lyn Topinka)
› Larger image

After the eruption, Mount St. Helens delivered another surprise. Scientists expected life to return in predictable ways, following well-known stages in ecological succession. They thought that in some areas nothing living could have survived.

But that’s not how things happened. For example, the time of day of the eruption and the season of the year meant some nocturnal animals were protected in burrows. Others had not yet arrived from migration. Dormant plants below ground also were protected. Rocky outcroppings, cliffs and snow patches sheltered some animals and plants. 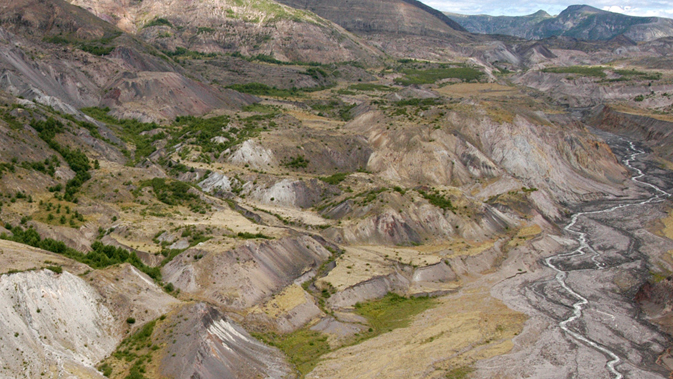 Aerial view of the 1980 debris avalanche taken on July 13, 2005. Regrowth appears throughout the main channel carved by the avalanche and eruption. (Credit: USGS/John Pallister)
› Larger image

Colonization and biological interaction in the blast area of the post-eruption landscape of Mount St. Helens created unique opportunities to learn how plants and animals respond to a massive, infrequent disturbance, which in turn has enabled scientists to understand and inform management plans for other disturbed areas. With its record of changes on the landscape year after year, scientists have used Landsat images to accurately characterize the pattern of ecosystem recovery after natural disasters.