These two images show changes in plant and tree growth near the Mexico-Guatemala border over time. The first image is composed of two cloud-free scenes: May 20, 1988 (west), and April 14, 1986 (east). The band combination is 5-4-3, which shows bare ground in pink, young regrowth and farms in pale green, and mature trees in darker green. The second image shows the same area in recent years, produced from two scenes: Dec. 9, 2009 (west), and March 9, 2011 (east). While the border is still visible, logging and agriculture have taken down most of the trees outside, and sometimes inside, the Maya Biological Reserve. (Credit: NASA's Earth Observatory)
› 1986-1988 image
› 2009-2011 image

A glance at a traditional map shows neatly printed names and sharp lines dividing countries from one another. When the view switches to satellite imagery, human political boundaries often disappear. But sometimes the political realities of a country are written into the landscape, and never was that more clear than in this Landsat image of the Mexico-Guatemala border.

Produced in 1988, the image above so starkly shows a line between forest clearing in Mexico and untouched forest in Guatemala that it became the driving force behind the establishment of 4 million acres of protected lands in Guatemala and cooperative conservation efforts across that very border.

But located in the river valley are also a number of ancient Maya cities that conservationists and archeologists wanted to see preserved. The National Geographic Society partnered with NASA in 1988 to document both these known and undiscovered archeological sites before the damming of the river.

"We were trying to see as much archeological information as we could before the flood waters removed the modem day Maya Indians as well as destroyed the ancient sites," says archeologist Tom Sever, who led the project. Now at the University of Alabama, Huntsville, he worked at NASA for 27 years and pioneered the use of remote sensing for finding archeological sites.

As part of that effort he put together two Landsat scenes: the western portion from Landsat 4 as seen on May 20, 1988, and the eastern part from Landsat 5 on April 14, 1986. Mexico's relative stability had led to agricultural development and clearing the forest, while Guatemala's ongoing civil war had led to rebels living in the Petén and as a side effect, limiting development and leaving the forest there untouched. 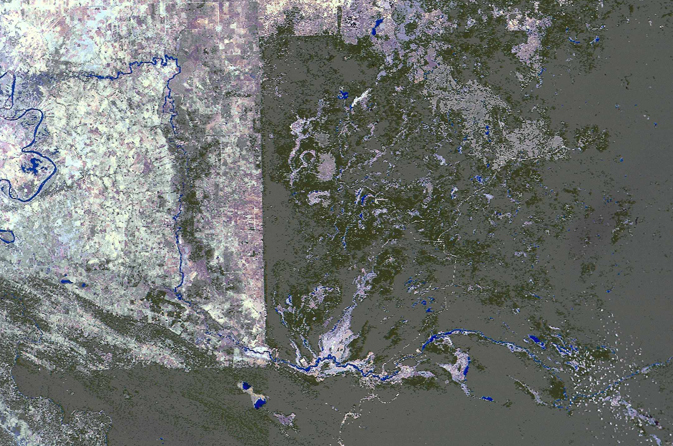 The original 1988 image of the border produced by Tom Sever and shown to the leaders of Mexico and Guatemala. The western portion is from Landsat 4 as seen on May 20, 1988, and the eastern part is from Landsat 5 on April 14, 1986. (Credit: NASA)
› Larger image

"When I produced it," says Sever, "I thought everyone in the world knew about this. It was surprising to see how for everybody it was news, alarming news."

"It's an amazing image," says Jim Nations, vice president of the National Parks Conservation Association's Center for Park Research. In 1988, he was a Fullbright researcher working with Guatemalan conservation groups when he joined Sever's team to ground-truth archeological sites found in satellite imagery.

Says Nations, "We put the image in the hands of Andrés Lehnhoff who was the executive director of the National Council of Protected Areas of Guatemala, a friend of ours that we were working with. He has periodic meetings with the president of Guatemala, Vinicio Cerezo. He takes it in to his next meeting, a big image, like a meter across and he rolls it across his desk, and the president looks at it and says the Spanish equivalent of "son of a gun!"

The border image, published in National Geographic's October 1989 issue, started a discussion of conservation between the presidents of Guatemala and Mexico that led to cooperative planning of parks in both countries. According to both Sever and Nations, at a meeting several years later President Cerezo told them both that the image of the border was the deciding factor that led to the Guatemalan Congress approving his creation the Maya Biosphere Reserve in 1990. 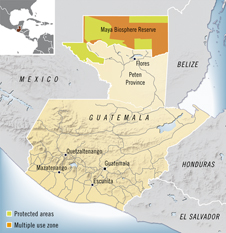 "It's a huge protected area. It's got five national parks inside it and two or three wildlife reserves and then the rest of it is a sustainable use forest," says Nations. "That image created a 4-million acre park."

The image also had a ripple effect on environmental research and conservation efforts across Central America. The image brought Sever to the attention of Jorge Cabrera, head of the Central American Commission on the Environment and Development (CCAD). "That led to an agreement between NASA and CCAD to conduct environmental types of research, and that agreement in 1992," says Sever, "eventually led to the development of the SERVIR program."

SERVIR, meaning 'to serve' in Spanish, is a joint venture between NASA and the U.S. Agency for International Development that provides satellite-based Earth observations and science applications to developing nations. NASA's Marshall Space Flight Center in Huntsville, Ala. manages the program, which began in 2004. Its first local hub opened in Panama in 2005 and since then it has grown to cover developing regions all over the world.

For Sever, the power of that image changed the direction of his research. Originally a desert archeologist, after his first project into the jungle he stayed to explore environmental impacts on ancient Maya societies, including deforestation. In addition to their archeological research, he and his research team continued to use Landsat to monitor the tropical forests in the Petén.

Since the end of Guatemala's civil war in 1996, commercial logging, cattle ranching and agriculture have contributed to current deforestation.

"It's been dramatic how quick things have changed," says Sever. As part of their verification of satellite observations in 1988, Sever and his research team rented a plane and flew along a road built into the jungle. "It looked like a sea of green out each side as we followed that road," he says. "In just the matter of a few years, the final time I took the route, you couldn't see any trees like you used to in any direction out the side."

But the Maya Biosphere Reserve still exists today. Despite the encroachment, Jim Nations says, "The fact that [the Reserve is] still there is to me a sign of success because if we hadn't had that image, if we hadn't created the law, then that entire area would be mostly gone."

That's the power of remote sensing, he adds. "You've got two major benefits. One of them is the analytical ability, the fact that you can actually calculate the size of areas, the amount of deforestation, the distance between two places. And then the 'wow' factor is that impact that you get when you roll an image out on your desk for the first time and you see it, you actually see it as if you were 571 miles up in space. It just blows you away."

Landsat satellites have been imaging Earth since 1972, and the data they return is one of the tools used by the United Nations to monitor deforestation around the globe.