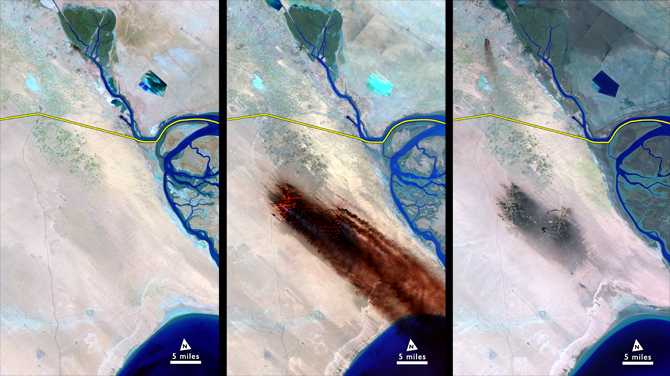 As Iraqi troops withdrew from Kuwait at the end of the first Gulf War, they set fire to over 650 oil wells and damaged many more, just south of the Iraq border (yellow line). These Landsat images show before, during and after the release of 1.5 billion barrels of oil into the environment, the largest oil spill in human history. (Credit: NASA's Goddard Space Flight Center)
› Larger image

In 1991, Landsat captured the devastating environmental consequences of war. As Iraqi forces withdrew from Kuwait, they set fire to over 650 oil wells and damaged almost 75 more, which then spewed crude oil across the desert and into the Persian Gulf.

Fires burned for ten months. According to a 2009 study published in Disaster Prevention and Management, firefighting crews from ten countries, part of a response team that comprised approximately 11,450 workers from 38 countries, used familiar and also never-before-tested technologies to put out the fires. When the last one was extinguished in November, about 300 lakes of oil remained, as well as a layer of soot and oil that fell out of the sky and mixed with sand and gravel to form 'tarcrete' across 5 percent of Kuwait's landscape. 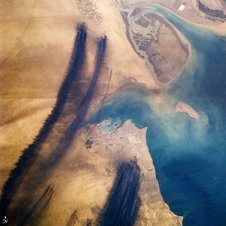 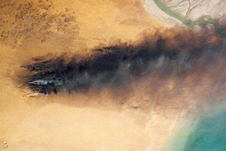 The oily plumes extended three to five kilometers up into the atmosphere and hundreds of kilometers across the horizon. Credit: NASA's Earth Observatory
› Larger image


Emergency responders and scientists in Kuwait used Landsat and other satellite data to locate and monitor the plumes of smoke and burning wells. The three images above from Landsat 5's Thermal Mapper show Kuwait in August 1990 before the fires, June 1991 while the fires were burning, and January 1992, two months after the last fires were put out. In this 3-band composite (7-4-2), Landsat-5’s shortwave infrared band (band 7) easily detected the flames burning at over 1300°F (700-800°C). The fires were so hot that the detectors overloaded temporarily, turning the saturated red dots into saturated lines visible in the June 1991 image.

Subsequent studies used Landsat to look at the before and after effects of the fires and to monitor the changes to the oil lakes over the past 22 years. The lakes are visible in the 1992 image around the area of the former fires.