Garden City, Ks., is at the heart of the American breadbasket where farmers grow corn, wheat and sorghum and raise cattle. Over the last sixty years, two technologies have transformed production from rain fed-oriented agriculture to high-intensity irrigated agriculture, a change that transformed the local economy.

Instead of relying on the rain, Garden City farmers now use low-cost groundwater pumps and a technique called "center-pivot irrigation" to essentially mine for water locked deep underground.

Garden City's current bounty is possible because beneath these farmer's fields is a vast reservoir of water, called the Ogallala Aquifer. This vast stretch of groundwater touches eight states, from South Dakota and Wyoming to New Mexico and Texas and so, because the semi-arid climate of the High Plains doesn't receive enough rainfall to support intensive agriculture, farmers pump this trapped water above ground to irrigate their fields.

The growth and change in irrigation practices is visible in these three Landsat images from 1972 (bands 6-5-4 from Landsat 1), 1988 and 2011 (bands 4-3-2 from Landsat 5). In these comparable band combinations, healthy vegetation appears bright red while sparse grasslands and fallow fields are in shades of green.

Located in the southwest part of the state, over time Garden City's rectangular fields of rain-fed farms and more traditional irrigation methods gave way to the large circles made by center-pivot irrigation. Farmers pump water directly from groundwater wells in the center of the field to a long pipe studded with low-hanging sprinklers. The pipe rotates from the center like the hand of a clock, watering the fields. It's a labor and water-saving method that has revolutionized agriculture worldwide, increasing yields and allowing food production in areas where plants would otherwise wither from drought. 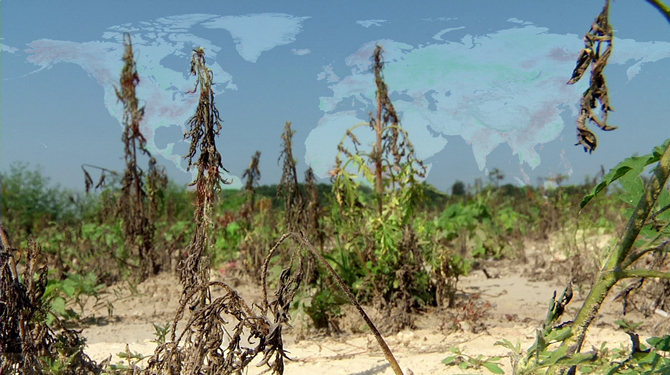 Because the Ogallala aquifer recharges from new rainwater slowly, some of the water used to irrigate these fields is actually water that's been trapped underground since the last Ice Age. Even with the rise of water-conserving center-pivot irrigation and other efforts to conserve, this aquifer is slowly going dry. According to the U.S. Geological Survey data from 1980-1995, water levels in southern sections of the Ogallala Aquifer during that time dropped 20 to more than 40 feet (6 to 12 meters). And the Kansas and Texas droughts in 2011 and 2012 have dropped water levels by several more feet.

The U.S. Department of Agriculture uses Landsat data to monitor crop inventories across the U.S. and the globe. The images are also used to evaluate insurance claims and prevent fraud. False-color images like these show healthy crops as bright red, making them easy to distinguish and measure.

In the last ten years scientists have also developed a method of detecting water using the thermal infrared bands on Landsats 5 and 7. These are sensitive to temperature. After a plant has absorbed water through its roots and used it, the plant 'breathes' out excess water vapor through its leaves. Called transpiration, this process, as well as the evaporation of water from wet soil, together ultimately lowers the overall temperature of the area. Using a set of equations, researchers used Landsat observations in the thermal infrared to create an estimate of water usage that water managers use to administer their resources. This method is quite often used in Idaho and Nevada where water is a scarce resource.