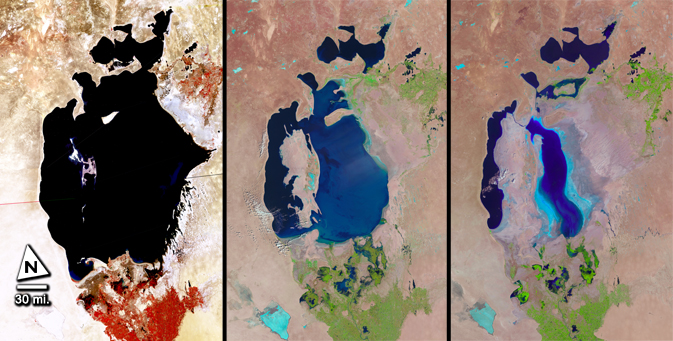 The Aral Sea in Central Asia began disappearing in the 1960s because of the diversion of its two feeder rivers for agriculture. This series of images illustrates unintended consequences of water management decisions. From left to right, the images were produced in 1977, 1998 and 2010. (Credit: USGS EROS Data Center)
› Larger images: 1977 | 1998 | 2010

The Aral Sea was once the fourth largest lake in the world. Situated in an otherwise desert region of Kazakstan and Uzbekistan, two rivers, the Syr Darya and the Amu Darya, carried snowmelt and rainfall from distant mountains to where they pooled in the Aral Basin. The Aral Sea supported farming in the river deltas and a fishing industry up through the first half of the 20th century.

The three image mosaics from 1977, 1998 and 2010 above show the Aral Sea spanning eight Landsat scenes. The 1977 image, taken by Landsat 2, shows features in false color: vegetation in red, water in black, and the surrounding desert in brown and white. The 1998 and 2010 images show vegetation in green, shallow water in light blue and deep water in dark blue.

The drying of the Aral Sea has led to a host of unintended consequences. According to 2007 research by Philip Micklin then at Western Michigan University in Kalamazoo, Mich., it devastated the local fishing industry. Local freshwater fish species died off when the slightly brackish water turned increasingly salty. Jetties and ports once on the coast are now sometimes as far as 70 miles (120 kilometers) inland. The more intense agriculture upstream meant the water that did arrive was polluted with fertilizers, pesticides, and metals that collected in the lake sediment. When that, too, dried out, winds blew the polluted dust back across the fields, hurting crop growth and causing health problems for the people of the region, including higher rates of cancer. The local climate also changed. Without the moderating effect of the broad body of water, winters became colder and summers hotter -- leaving a shorter growing season. 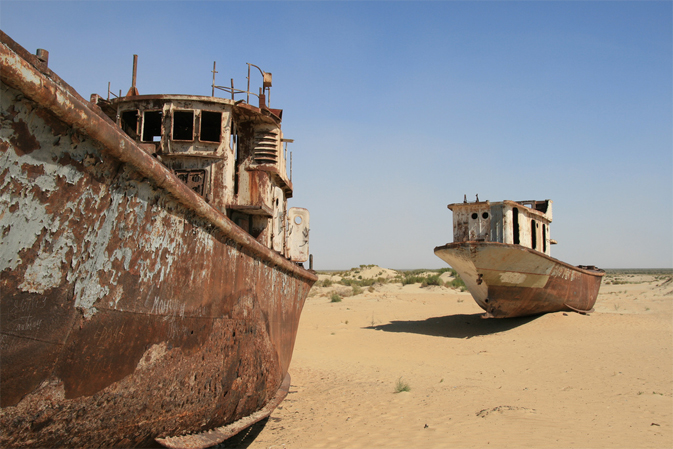 "If you tell somebody the Aral Sea is drying, nobody will know where the Aral Sea is," says Ashibindu Singh at the United Nations Environment Programme Division of Early Warning and Assessment. "When they see the bigger picture of how many square kilometers have dried up, then people start paying attention."

Singh's group uses satellite imagery, especially time-series data, to communicate environmental problems to the outside world. The Aral Sea is one of many lakes worldwide whose rivers have been partially diverted for agriculture. "We see a similar thing happening with some of the other lakes, like Lake Chad in Africa, Lake Faguibine in Mali," says Singh.

The Kazakstani government, with funding from the World Bank, completed a dam in 2005 that separates the North Aral Sea from the large southern basin. Fed by the remains of the Syr Darya River, the shoreline of this much-reduced lake has since stabilized and fish are returning.