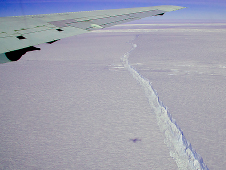 NASA's DC-8 flew over the Pine Island Glacier Ice Shelf on Oct. 14, 2011, as part of Operation IceBridge. A large, long-running crack was plainly visible across the ice shelf. The DC-8 took off on Oct. 26, 2011, to collect more data on the ice shelf and the crack. The area beyond the crack that could calve in the coming months covers about 310 square miles (800 sq. km). This crack across the glacier is deep and wide enough to nearly engulf the Statue of Liberty. Credit: NASA's Operation IceBridge
› Download video 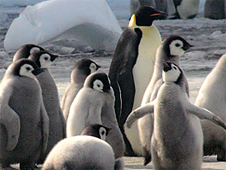 The first ever high-resolution, three-dimensional true color map of Antarctica is the result of more than 1,100 Landsat 7 images stitched together to create the Landsat Image Mosaic of Antarctica (LIMA), released in 2007.

"This is something that would have been impossible without Landsat," says Thomas Loveland, a scientist with the U.S. Geological Survey (USGS) Earth Resources Observation and Science (EROS) Center in Sioux Falls, S.D.

"LIMA was the first comprehensive and high-resolution view of one of the most remote regions on Earth," he adds.

NASA worked with the USGS, the National Science Foundation and the British Antarctic Survey to create the LIMA map. It and all the individual scenes that make up the map, which cover every bit of Antarctica, are available on the Internet, free of charge by the USGS, providing everyone in the world a view of the highest, driest, coldest, windiest and brightest of all of the Earth's seven continents.

To create the LIMA map, scientific visualizers combined Landsat 7 satellite imagery acquired in 1999 and 2001 and a digital elevation model with field data measurements.

This bird's eye view of Antarctica led to a surprising discovery about one iconic cold-weather bird, the Emperor penguin.

"We were able to find entirely new colonies of Emperor penguins by looking at the Antarctica coastline from space," says Peter Fretwell, a geographic information scientist at the British Antarctic Survey.

"It was a serendipitous discovery," Fretwell says. "If this data wasn't free, we would have never been able to do our research."

Fretwell and his colleagues were downloading and viewing hundreds of LIMA scenes to map a section of the Antarctic coastline when Fretwell noticed an unusual feature.

"I could see brown stains in the LIMA imagery," he says.

Those brown stains are where colonies of Emperor penguins were breeding. "We started going around the whole of the coastline, using about 200 scenes, looking for these dark areas," Fretwell says.

The discovery was only possible using satellite data, he says, because for the Emperor penguin, those colonies are only their temporary home.

"Emperor penguins breed in Antarctica almost exclusively on sea ice," Fretwell says. Come summer, the ice melts away, so researchers previously to find penguins would have to brave bracingly cold early-spring temperatures and travel to ridiculously remote locations, and even then they couldn't be sure they'd found every colony.

Researchers have also used LIMA to track Antarctica's mighty glaciers. Landsat captured the telltale 'flow stripes' of these slow-moving rivers of ice as they creep, ever so slowly, across the continent.

Much of the ice in Antarctica is trapped within these glaciers. They form when snow, accumulating for tens to hundreds of years, eventually succumbs to gravity, and compressing enough to form dense, glacial ice. Underneath these moving bodies of ice are mountains, plains and ocean basins that are almost completely concealed by ice.

In October 2011, NASA's Operation Ice Bridge mission discovered a massive crack stretching across the glacier. It's about 820 feet (~250 meters) across at its widest point and about 200 feet (61 meters) at its deepest. If the glacier breaks at this crack, it will create a massive iceberg of 350 square miles (907 kilometers), about the size of all of New York City.

In addition to this huge crack, one that's deep enough to nearly swallow the entire Statue of Liberty, continuous measurements by Landsat, other satellites and field stations show that the entire Pine Island glacier is rapidly shrinking. Scientists believe that warm water is undercutting the glacier, melting it from below and thinning the ice.

Scientists continue to track Antarctica's ice and wildlife using Landsat 7, which remains in operation 13 years after its launch. The next satellite in the Landsat series, which began in 1972 with Landsat 1, is scheduled to launch in February 2013 from Vandenberg Air Force Base in Lompoc, Calif. Known as the Landsat Data Continuity Mission (LDCM), it will extend the world's longest-running satellite program for global land observations into the future.