Grow Text SizeShrink Text Size
American Landscapes - North Central Colorado, Submitted by Justin Hirsch
The forests of northern Colorado have gone through many changes driven by both natural and human causes. Justin Hirsch from Steamboat Springs was interested in seeing the dynamic changes to the forest caused by mountain pine bark beetles. In this pair of Landsat images from 2001 and 2010, the tree die-off from the insect infestation is visible.

U.S. forests are dynamic ecosystems that are entwined with human activity. In addition to the outright conversion of forests to other land covers and uses, such as ranching or agriculture, active changes to forest land cover include larger scale wood harvesting through clear-cutting, selective cutting and thinning. Reforestation after harvest can both be active, where young trees are planted, or passive, where natural regeneration occurs.

Human activities can also have more indirect effects on forest ecosystems through management practices. For instance, long-term fire suppression or placing certain forests into various protected statuses, can lead to subsequent land cover changes years later. Forests also undergo regular "natural" changes, from droughts, wild fire, storm damage and insect infestations, all of which can each alter both forest composition and tree age across a landscape. The recent widespread outbreak of the mountain pine bark beetle in the western U.S., which resulted in large areas of forest mortality, is an example of a natural process possibly influenced by indirect human actions. 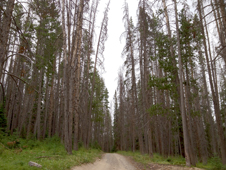 Dendroctonus is a genus of several species of beetles that can infest pine trees across the United States. They occur most noticeably in the South and West where various species of pines can make up large percentages of forest land covers. In the South, the patches of dead trees killed by bark beetle outbreaks tend not to show up dramatically in Landsat imagery because affected areas are often quickly cut out to prevent further spreading of tree mortality, especially on commercial forestry land. Wood harvested earlier than planned may impact local and regional stumpage prices, especially for pulpwood.

Pine beetle outbreaks in western mountainous forests are more easily detected in Landsat imagery because the areas impacted often extremely large. Management of patches of insect-killed forest is complicated in the West because of the often remote locations of the affected areas that make access difficult. Management challenges also involve land ownership, management status of forests (e.g. insect-killed patches of forest in wilderness areas generally are not cleared), and the changing infrastructure of commercial forestry activities (e.g. there has been less wood harvested from public lands during the latter half of the Landsat era than during the first half).

The intensity of recent pine beetle outbreaks in the U.S. West is conspicuous in Landsat imagery when viewed with specific band combinations. According to the U.S. Forest Service, the current outbreak is the largest and most widespread in its more than 100-year history.

Justin Hirsch from north-central Colorado is interested in what has happened to the pine-dominated forests in his area and wanted to "see what the pine beetle can do from space." We selected an area of the Rocky Mountains just east of the continental divide, mostly in Jackson County, Colorado, and south of the Wyoming-Colorado border, as an example of where large swaths of forest had been killed by pine beetle activity.

A decade later on Sept, 3, 2011, much of the forest shows up as reddish-brown using the same band combination. This is due to decreases in chlorophyll absorption (dead and dying trees have little chlorophyll to absorb light in band 3), decreased biomass (fewer needles to reflect light affecting band 4), and low levels of leaf water content (increasing band 7 shortwave infrared reflectance). Typically, tree mortality in the 30 percent range or greater produces these features. Here several ground photographs supplied by Hirsch from a nearby area shows the heavy tree mortality that is commonly seen by people within the region.

Although pine bark beetle outbreaks are not new to the mountainous West, evidence from the scientific literature shows that changing climatic conditions may be exacerbating their intensity and duration. Regional forests may be facing overall drier conditions than in decades past. Drought conditions typically stress and weaken trees, making them more susceptible to insect attack. Warmer winter conditions also may be helping the pine bark beetles to survive the cold months more easily; the historically colder winters may have held pine beetle populations in check.

Landsat imagery is extremely useful for monitoring forest health over time. With continued observations we will be able to determine how the current forest mortality inflicted by the pine bark beetles fits into the dynamics of these ecosystems.