Grow Text SizeShrink Text Size
American Landscapes - Vermilion Parish, La., Submitted by Brent Yantis and Whitney Broussard
The landforms of southern Louisiana have been shaped by the wanderings of the lower Mississippi River but with modern engineering of where the river flows, the salt marshes of the Chénier Plain are in a losing battle against the open ocean eroding the coastline. Mr. Brent Yantis and Dr. Whitney Broussard are interested in telling the story of the changing coastline.

The landforms of southern Louisiana have been shaped by the wanderings of the lower Mississippi River since the end of the last Ice Age. The mouth of the river has meandered east and west across the southeastern coastal zone, emptying its contents into the Gulf of Mexico and building a deltaic plain through time.Twice during its course through time, the distributary of the Mississippi was approximately 170 miles west of the modern delta.

In southwestern coastal Louisiana, ridges formed of sand and shell sediments and shaped by ancient currents and wave actions of the Gulf of Mexico rise above the coastal marshes. These landforms, called chéniers, and their ridges can be a few meters tall at their highest points. A chénier develops as a result of the Mississippi River's location. When the river meanders to its western positions, it deposits the silts and clays it carries beyond the ridges, expanding coastal salt marshes into the Gulf. When the river meanders far to east, like it is now, it has little influence on the western portion of the coast. The result is a landscape of successional ridges parallel to the beachline separated by wide expanses of salt marsh.

Chéniers are the home to the only upland ecosystems for miles around. The coastal area of southwestern Louisiana became known as the Chénier Plain. When Native Americans and the French Arcadians settled here, these ridges became the points of occupation. The people living on the chéniers made a living off of the mostly wetlands-dominated landscape by farming, fishing, hunting, trapping and more recently, the extraction of petroleum and natural gas.

But despite these early settlers, changes to the land in this low-lying ecologically rich region occurred mostly in the second half of the 20th century. A number of factors contribute to the changes that have accelerated since the end of the Second World War. Engineering constraints to control the lower river caused massive changes in the deposition of the waterborne sediment loads, notably they no longer spread over the wetlands, replenishing the soil and delivering nutrients for the ecosystem. Shipping channels and access canals cut through the wetlands and impounded the marshes with linear dredge deposits called spoilbanks. These structural controls have made the marshes less resilient in repairing themselves after major storms such as hurricanes. Over the last century, rising sea levels and a subsiding coast have added to a changing landscape where open water is slowly displacing solid salt marsh. These change agents were already ongoing when the first Landsat was launched in 1972.

The animation at the top of this page of six Landsat images is nearly centered on the community of Pecan Island, located on a chénier between the salty Gulf of Mexico to the south and freshwater White Lake to the north. The Aug. 22, 1972, image already shows considerable amounts of open water in the marshes south of the thin straight line that is the highway along the Pecan Island ridge. 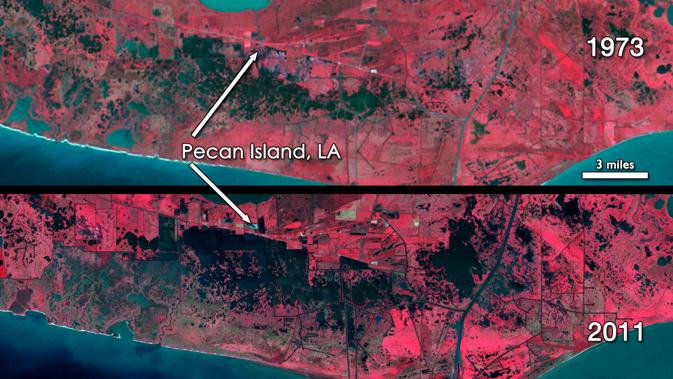 In Landsat imagery, clear water shows up blue-black as most of the light is absorbed. Water that has high turbidity reflects more light and appears milky in color. Coastal marsh, tree patches, and farmland display various shades of red reflecting the chlorophyll in the growing vegetation.

Areas that had been dry in 1973 just south of the community are lost to open water in 1980. This Oct. 5, 1980, image also caught the struggle between farmland and water. In addition, areas where land had been submerged in 1973 were now fields of crops. Most likely the water was pumped out to make way for the fields.

The third image is from Aug. 25, 1986, a year after Hurricane Danny blew through the area. Just south of Pecan Island, reclaimed farm fields from 1980 are underwater again Many will be permanently abandoned from this time forward. Along the coast, water reaches much further inland.

The last three images continue to show an ephemeral ebb and flow of high water and land losses to open water. The Oct. 12, 1992 image shows areas temporally flooded after Hurricane Danny are dry again but other places already inundated in 1985 remain water covered. The Sept. 25, 2003 image shows the coast during a relatively quiet year for storms in that area, which changed dramatically with the Oct. 16, 2005 hurricane season. The flooding from Hurricane Rita is seen in the separate image comparison above.

The last image in the animation at the top of the page is a Landsat Thermal Mapper image from Oct. 1, 2011. Most of the areas temporarily flooded by Rita are dry again, but this image demonstrates the largest area of sustained open water in the entire panel, including a large area of open water in a marsh area between Pecan Island and a shipping canal to the east. Again, subsidence and water impounded by spoilbanks from the dredged canal continue to alter this changing landscape.