It has now been five months since Kepler science operations began. The Kepler spacecraft continues in its drift-away, heliocentric orbit, and continues in its science data collecting attitude. The Kepler team is approaching another monthly download of science data. The next scheduled download is planned for Oct. 17-19, 2009. Further analysis had been completed on the Safing events that Kepler experienced on June 15, 2009, and July 2, 2009. The cause has been further isolated to a low voltage power supply, whose upsets cause the central RAD750 processor to reset. The resets were not caused by any problem with the RAD750 processor unit itself.

Last week, the team performed two semi-weekly spacecraft contacts. This “engineering” contact utilizes the vehicle’s X-Band transmitter and the omni-directional antennas to give us a relatively low bandwidth connection (typically ranging from 2 to 8 kbps). Although insufficient to downlink the extensive science data being collected and stored onboard, this connection has the benefit that we do not have to leave the science attitude and hence can continue to collect science data as the operations team checks out the vehicle. These contacts typically last about 8 hours, during which time onboard logs are downlinked, along with a small portion of the science targets that have been chosen to give us a quick look at the instrument performance in case any adjustments need to be made. These contacts also give us the opportunity to upload new command sequences, software patches or parameter updates, if required. 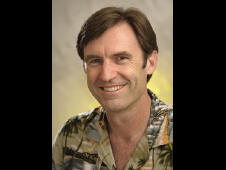 Why I joined the Kepler Team
I was tired of working for start-ups, so I began to paint my parachute and the color that emerged was that I should apply my software skills in a field that I was passionate about--such as astronomy. I joined the team at the end of 2006 to develop the SOC pipeline and am now working on a project that is contributing to mankind's knowledge. What could be more rewarding than that?

Bill received his undergraduate degree in Computer Science and Mathematics at the University of California, Davis, and started out his career in 1985 at SRI followed by SAP while he lived in beautiful Heidelberg, Germany. By 1993, California was calling him back. He took a year to get home while traveling through Asia and Australia.

He has worked for several start-ups and has been programming user interfaces in Java since 1997. He joined Orbital Sciences Corporation in 2006 when he began working in the Kepler SOC.

Bill has played in three Ultimate Frisbee World Championships: the first for the German National Team and the next two for the Geneva Wizards. He now lives in Palo Alto with his sweetheart of many years, Lori Heyman, and wishes he had more time to sail, dive, hike, cycle, brew, and write open source software.

Kepler Job Description/Role/Duties
Bill Wohler is a senior principal software engineer for the Kepler SOC who enjoys working in the Java programming language. He is responsible for most of the user interfaces in both application form and on the web as well as a smattering of the pipeline modules. He maintains the SOC's software repository in Subversion and the continuous build system on Hudson. He also keeps the SOC productive and happy by managing the delivery of Peet's coffee to the team and supplying the Kepler barbecues with his homebrew.