Grow Text SizeShrink Text Size
Kepler and the Search for Life in Our Galaxy
There are so many stars in our galaxy that even if planets with complex life (animals and plants) are rare – say one for every billion stars – there could still be dozens here in the Milky Way. But we are just beginning to learn about worlds beyond our solar system, called exoplanets, so we really don't have a good idea of what the chances are for advanced life. That's where NASA's Kepler mission comes in. 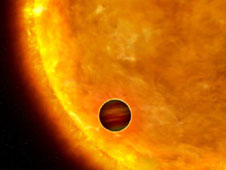 This is an artist's impression of a Jupiter-sized planet passing in front of its parent star. Such events are called transits. When the planet transits the star, the star's apparent brightness drops slightly for a short period. Through this technique, astronomers can use Kepler to search for planets across the galaxy by measuring periodic changes in a star's luminosity. Credit: NASA/ESA/G. Bacon (STScI)
Print-resolution copy
Currently, we have only one example of complex life –- our own. So we have to use conditions that give rise to this kind of life when we go looking for it elsewhere in the Universe. Essential ingredients in the recipe for life as we know it include liquid water; an energy source, such as sunlight or chemicals from volcanic activity; and a supply of raw materials in the form of critical elements like carbon, oxygen, hydrogen, and nitrogen, to name just a few. The most likely places where all the ingredients will be present are rocky planets, like Earth, that are within the habitable zone of their parent stars.

The habitable zone is where the temperature is just right for liquid water to exist on the surface of an exoplanet. If the planet is too close to its star, it will be too hot, and you'll end up with a world like Venus, where the oceans have boiled away. Too far away, however, and you get something like Mars, where most, if not all, of the water on the surface is frozen.

The Kepler mission seeks to detect Earth-like, i.e., rocky planets in our galaxy within the habitable zone of their parent stars, by looking for planetary transit events. These are situations where the planet passes in front of its star as seen from our point of view, slightly dimming the star's brightness. Since planetary transit events are fleeting, and it is unknown how common they may be, Kepler will continuously observe some 100,000 sun-like stars (in about 100 square degrees of the sky in the Cygnus region) for four years.

NASA's TRACE satellite captured this image of Venus (black disk) crossing the face of the Sun in 2004 as seen from Earth orbit. Before that, the last event occurred in 1882. The next Venus transit will be visible in 2012. Credit: NASA

Observing planetary transits is challenging, because the brightness changes are exceedingly small. For example, Earth is about one-hundredth the diameter of the sun, so from an alien point of view, when Earth passes in front of the sun, it obscures only a tiny area on the solar disk -- just one ten-thousandth. An alien watching Earth transit the sun would see our star's brightness drop by just one part in ten thousand. We expect similar faint eclipses when searching for Earth-like planets around sun-like stars. To detect such tiny changes in brightness, Kepler will be able to observe a brightness change as small as one part in one hundred thousand.

Other challenges for Kepler are brightness changes that arise from a natural variation within the star itself, rather than from a transiting planet. If a brightness change repeats at regular intervals, it's more likely to be from an exoplanet, since its orbit will make it transit at the same periods. Scientists with the mission will need to see the same change at least twice before it's considered a possible exoplanet. Since the mission has a limited time to make its observations, if a transit takes more than a year to repeat, it will be difficult to confirm as an exoplanet.

We can analyze a planetary transit event to discover basic characteristics of the planet. A large planet will block more starlight than a small one, so the size of the planet can be estimated by how much the star dims during the transit. A planet close to its star zips around it faster than one farther away, so the time between transits will give us an approximate distance of the planet from its star.

The planet will also tug at the star with its gravity. Much as the siren of a speeding ambulance changes pitch as it passes by – higher when it's moving closer, and lower when it's moving away -- this gravitational pull will cause the colors (spectrum) of the star's light to shift slightly – more blue if the star is moving toward us, more red if the star is moving away. Astronomers can observe this color shift with instruments that separate the star's light into its component colors, called its spectrum. By observing the amount of color shift in the star's spectrum, astronomers can get the mass of the planet relative to its parent star – more massive planets have a greater pull and will cause a larger color shift.

Most exoplanet detections so far have been made using this spectral shift. Such detections, however, tend to favor massive planets (about Jupiter’s size or larger). With current technology, it's extremely difficult to detect Earth-sized planets using this technique.

Kepler will also be used to make discoveries about the stars themselves. There are many stars that are binaries (double stars). These binaries may exhibit eclipses. The Kepler mission data analysis program has a pipeline data processing that can discriminate the eclipsing binaries among the stars observed and will be analyzed accordingly. Binary stars, including cataclysmic variables (e.g., exploding stars such as novae) and intrinsic variable stars, including pulsating variables, that are observed with the Kepler satellite will present unprecedented opportunities to further astrophysical research.

The Kepler observatory was placed in an Earth-following orbit March 6, 2009. This mission has been conceived by William Borucki and Dave Koch of NASA Ames Research Center, Moffett Field, Calif., and developed at NASA Ames.