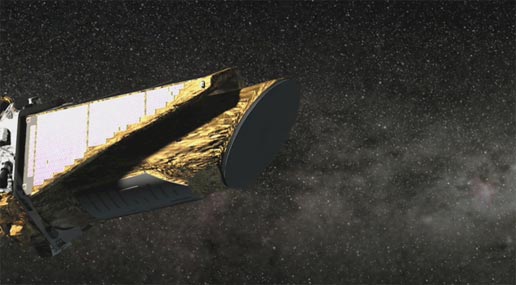 This artist's animation illustrates how the dust cover on NASA's Kepler telescope will be ejected. Engineers will send a command up to the space telescope to pass an electrical current through a "burn wire." The burn wire will break and a latch holding the cover closed will be released. The spring-loaded cover will swing open on a fly-away hinge, before drifting away from the spacecraft and entering its own orbit around the sun. (Kepler is also orbiting the sun in what's called an Earth-trailing orbit.)

With the cover off, starlight will enter Kepler's science instrument, the photometer, and be imaged onto its focal plane. Engineers will continue to calibrate the instrument using images of stars for another several weeks, after which science observations will begin.