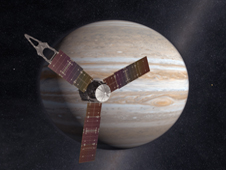 The Juno spacecraft passes in front of Jupiter in this artist's depiction. Juno, the second mission in NASA's New Frontiers program, will improve our understanding of the solar system by advancing studies of the origin and evolution of Jupiter. The spacecraft will carry eight instruments to investigate the existence of a solid planetary core, map Jupiter's intense magnetic field, measure the amount of water and ammonia in the deep atmosphere, and observe the planet's auroras. Credit: NASA/JPL-Caltech
› View larger image GREENBELT, Md. - The magnetometers developed at NASA's Goddard Space Flight Center in Greenbelt, Md., for the Juno mission to Jupiter were delivered recently to Lockheed Martin in Denver, Colo. Designed and built by an in-house team of Goddard scientists, engineers and technicians, this instrument will map the planet's magnetic field with great accuracy and observe its variations over time. Each of the two vector magnetometers carries with it a pair of non-magnetic star cameras to determine its orientation in space with commensurate accuracy. These were designed and built by a team led by John Jorgensen at the Danish Technical University in Copenhagen, Denmark.

"Juno's magnetometers will measure Jupiter's magnetic field with extraordinary precision and give us a detailed picture of what the field looks like both around the planet and deep within," says Goddard's Jack Connerney, the mission's Deputy Principal Investigator and head of the magnetometer team. "This will be the first time we’ve mapped the magnetic field all around Jupiter—it will be the most complete map of its kind ever obtained about any planet with an active dynamo, except, of course, our Earth."

Scheduled for launch in 2011, Juno is the second mission in NASA's New Frontiers program. The mission will improve our understanding of the solar system by advancing studies of the origin and evolution of Jupiter. The spacecraft will carry nine instruments to investigate the existence of a solid planetary core, map Jupiter's intense magnetic field, measure the amount of water and ammonia in the deep atmosphere, and observe the planet's auroras.

"The magnetometers play a unique and important role in Juno's investigation of the formation and evolution of Jupiter," says Juno's Principal Investigator, Scott Bolton of the Southwest Research Institute in San Antonio, Texas. "They provide one of the ways that Juno will see deep inside the giant planet, and this will help us understand how and where Jupiter's powerful magnetic field is generated."

The Juno magnetometers will study Jupiter's powerful magnetic field, which is nearly 20,000 times as strong as Earth's. The field is generated deep within the planet's atmosphere, where the intense pressure compresses hydrogen gas into an electrically conductive fluid. Fluid motion within the planet drives electric currents in this liquid hydrogen, and these currents generate the magnetic field. If a map were drawn of the magnetic field lines running between Jupiter's north and south poles, the region of space filled by the lines (called the magnetosphere) would be enormous. Jupiter's magnetosphere extends up to 3 million kilometers (nearly 2 million miles) toward the sun and as far as Saturn's orbit in the other direction.

"From a distance, Jupiter's magnetic field has two poles, north and south, like Earth's. But looking closer, below Jupiter's surface, the magnetic field is thought to be quite complex and tangled," says Connerney. "Juno will give us a detailed picture of the magnetic field extending down to the surface of the dynamo, or engine, that generates it."

Jupiter's powerful magnetic environment also creates the brightest auroras in the solar system, as charged particles get trapped by the field and rain down into the atmosphere. Juno will directly sample the charged particles and magnetic fields near Jupiter’s poles for the first time, while simultaneously observing the auroras at ultraviolet wavelengths of light. These investigations will greatly improve the understanding of this remarkable phenomenon and of similar magnetic objects, such as young stars that have their own planetary systems.

For information about NASA and agency programs, visit:
http://www.nasa.gov/home

For information about the Juno mission, visit:
http://www.nasa.gov/juno Goddard Press Release No. 0-102