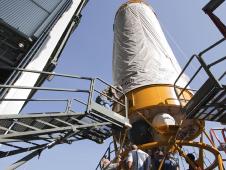 PASADENA, Calif. - NASA's Juno spacecraft is 30 days before its first launch window opens. "The launch window is the length of time allotted every day for an attempt to launch the spacecraft," said Jan Chodas, Juno project manager from NASA's Jet Propulsion Laboratory in Pasadena, Calif. "The launch period is the period of time in days when everything is in the right place to get your mission off to the right start."

For a mission like Juno, getting everything in the right place includes considering the size of the rocket and spacecraft, where our home planet -- and in particular Juno's launch pad -- is pointed at any moment, and its location in space relative to other celestial objects like Juno's final target, Jupiter.

Juno is scheduled to launch aboard a United Launch Alliance Atlas V rocket from pad 41-C at the Cape Canaveral Air Force Station, Fla. The solar-powered spacecraft will orbit Jupiter's poles 33 times to find out more about the gas giant's origins, structure, atmosphere and magnetosphere and investigate the existence of a solid planetary core.

NASA's Jet Propulsion Laboratory, Pasadena, Calif., manages the Juno mission for the principal investigator, Scott Bolton, of Southwest Research Institute in San Antonio. The Juno mission is part of the New Frontiers Program managed at NASA's Marshall Space Flight Center in Huntsville, Ala. Lockheed Martin Space Systems, Denver, built the spacecraft. Launch management for the mission is the responsibility of NASA's Launch Services Program at the Kennedy Space Center in Florida. JPL is a division of the California Institute of Technology in Pasadena.

More information about Juno is online at http://www.nasa.gov/juno and http://missionjuno.swri.edu.