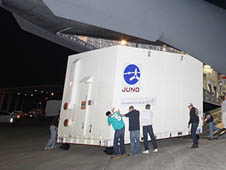 In the evening hours of April 8, NASA's Juno spacecraft arrived in Florida to begin final preparations for a launch this summer. The Jupiter-bound spacecraft made the trip from Denver inside the belly of a U.S. Air Force C-17 Globemaster. Image credit: NASA/JPL-Caltech
› Larger image

PASADENA, Calif. - NASA's Juno spacecraft has arrived in Florida to begin final preparations for a launch this summer. The spacecraft was shipped from Lockheed Martin Space Systems, Denver, to the Astrotech payload processing facility in Titusville, Fla., today. The solar-powered Juno spacecraft will orbit Jupiter's poles 33 times to find out more about the gas giant's origins, structure, atmosphere and magnetosphere.

"The Juno spacecraft and the team have come a long way since this project was first conceived in 2003," said Scott Bolton, Juno's principal investigator, based at Southwest Research Institute in San Antonio. "We're only a few months away from a mission of discovery that could very well rewrite the books on not only how Jupiter was born, but how our solar system came into being." Next Monday, Juno will be removed from its shipping container, the first of the numerous milestones to prepare it for launch. Later that week, the spacecraft will begin functional testing to verify its state of health after the road trip from Colorado. After this, the team will load updated flight software and perform a series of mission readiness tests. These tests involve the entire spacecraft flight system, as well as the associated science instruments and the ground data system. Juno will be carried into space aboard a United Launch Alliance Atlas V rocket lifting off from Launch Complex-41 at the Cape Canaveral Air Force Station in Florida. The launch period opens Aug. 5, 2011, and extends through Aug. 26. For an Aug. 5 liftoff, the launch window opens at 8:39 a.m. PDT (11:39 am EDT) and remains open through 9:39 a.m. PDT (12:39 p.m. EDT). NASA's Jet Propulsion Laboratory, Pasadena, Calif., manages the Juno mission for the principal investigator, Scott Bolton, of Southwest Research Institute at San Antonio. The Juno mission is part of the New Frontiers Program managed at NASA's Marshall Space Flight Center in Huntsville, Ala. Lockheed Martin Space Systems, Denver, is building the spacecraft. The Italian Space Agency in Rome is contributing an infrared spectrometer instrument and a portion of the radio science experiment. Launch management for the mission is the responsibility of NASA's Launch Services Program at the Kennedy Space Center in Florida. JPL is a division of the California Institute of Technology in Pasadena. Additional information about Juno is available at http://www.nasa.gov/juno . DC Agle 818-393-9011
Jet Propulsion Laboratory, Pasadena, Calif.
agle@jpl.nasa.gov