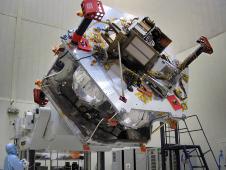 Once the radiation vault was installed on top of the propulsion module, NASA's Juno spacecraft was lifted onto a large rotation fixture to continue with its assembly process. Image credit: NASA/JPL-Caltech/LMSS
› Full image and caption 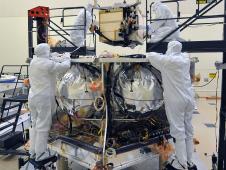 NASA's Juno spacecraft will be forging ahead into a treacherous environment at Jupiter with more radiation than any other place NASA has ever sent a spacecraft, except the sun. In a specially filtered cleanroom in Denver, where Juno is being assembled, engineers recently added a unique protective shield around its sensitive electronics. New pictures of the assembly were released today.

"Juno is basically an armored tank going to Jupiter," said Scott Bolton, Juno's principal investigator, based at Southwest Research Institute in San Antonio. "Without its protective shield, or radiation vault, Juno's brain would get fried on the very first pass near Jupiter."

An invisible force field filled with high-energy particles coming off from Jupiter and its moons surrounds the largest planet in our solar system. This magnetic force field, similar to a less powerful one around Earth, shields Jupiter from charged particles flying off the sun. The electrons, protons and ions around Jupiter are energized by the planet's super-fast rotation, sped up to nearly the speed of light.

Jupiter's radiation belts are shaped like a huge doughnut around the planet's equatorial region and extend out past the moon Europa, about 650,000 kilometers (400,000 miles) out from the top of Jupiter's clouds.

"For the 15 months Juno orbits Jupiter, the spacecraft will have to withstand the equivalent of more than 100 million dental X-rays," said Bill McAlpine, Juno's radiation control manager, based at NASA's Jet Propulsion Laboratory in Pasadena, Calif. "In the same way human beings need to protect their organs during an X-ray exam, we have to protect Juno's brain and heart."

The strategy? Give Juno a kind of six-sided lead apron on steroids.

With guidance from JPL and the principal investigator, engineers at Lockheed Martin Space Systems designed and built a special radiation vault made of titanium for a centralized electronics hub. While other materials exist that make good radiation blockers, engineers chose titanium because lead is too soft to withstand the vibrations of launch, and some other materials were too difficult to work with.

Each titanium wall measures nearly a square meter (nearly 9 square feet) in area, about 1 centimeter (a third of an inch) in thickness, and 18 kilograms (40 pounds) in mass. This titanium box -- about the size of an SUV's trunk – encloses Juno's command and data handling box (the spacecraft's brain), power and data distribution unit (its heart) and about 20 other electronic assemblies. The whole vault weighs about 200 kilograms (500 pounds).

The vault is not designed to completely prevent every Jovian electron, ion or proton from hitting the system, but it will dramatically slow down the aging effect radiation has on electronics for the duration of the mission.

"The centralized radiation vault is the first of its kind," Bolton said. "We basically designed it from the ground up."

When NASA's Galileo spacecraft visited Jupiter from 1995 to 2003, its electronics were shielded by special components designed to be resistant to radiation. Galileo also didn't need to survive the harshest radiation regions, where Juno will operate.

But Juno isn't relying solely on the radiation vault. Scientists designed a path that takes Juno around Jupiter's poles, spending as little time as possible in the sizzling radiation belts around Jupiter's equator. Engineers also used designs for electronics already approved for the Martian radiation environment, which is harsher than Earth's, though not as harsh as Jupiter's. Parts of the electronics were made from tantalum, or tungsten, another radiation-resistant metal. Some assemblies also have their own mini-vaults for protection.

Packing the assemblies next to each other allows them to shield their neighbors. In addition, engineers wrapped copper and stainless steel braids like chain mail around wires connecting the electronics to other parts of the spacecraft.

JPL tested pieces of the vault in a radiation environment similar to Jupiter's to make sure the design will be able to handle the stress of space flight and the Jupiter environment, McAlpine said. In a special lead-lined testing tub there, they battered pieces of the spacecraft with gamma rays from radioactive cobalt pellets and analyzed the results for Juno's expedition.

The vault was lifted onto Juno's propulsion module on May 19 at Lockheed Martin's high-bay cleanroom. It will undergo further testing once the whole spacecraft is put together. The assembly and testing process, which also includes installing solar panels for the first-ever solar-powered mission to Jupiter, is expected to last through next spring. Juno is expected to launch in August 2011.

"The Juno assembly is proceeding well," said Tim Gasparrini, Lockheed Martin program manager. "We have a number of the flight and test unit spacecraft avionics components installed into the radiation vault for system testing and we have also just installed the first instrument, the microwave radiometer."

JPL manages the Juno mission for the principal investigator, Scott Bolton, of Southwest Research Institute at San Antonio, Texas. Lockheed Martin Space Systems, Denver, Colo., is building the spacecraft. The Italian Space Agency in Rome is contributing an infrared spectrometer instrument and a portion of the radio science experiment.

More information about Juno is online at http://www.nasa.gov/juno .