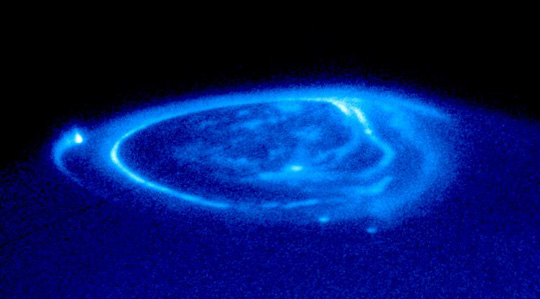 This is a spectacular NASA Hubble Space Telescope close-up view of an electric-blue aurora that is eerily glowing one half billion miles away on the giant planet Jupiter. Auroras are curtains of light resulting from high-energy electrons racing along the planet's magnetic field into the upper atmosphere. The electrons excite atmospheric gases, causing them to glow. The image shows the main oval of the aurora, which is centered on the magnetic north pole, plus more diffuse emissions inside the polar cap.

Though the aurora resembles the same phenomenon that crowns Earth's polar regions, the Hubble image shows unique emissions from the magnetic "footprints" of three of Jupiter's largest moons. (These points are reached by following Jupiter's magnetic field from each satellite down to the planet).

Auroral footprints can be seen in this image from Io (along the lefthand limb), Ganymede (near the center), and Europa (just below and to the right of Ganymede's auroral footprint). These emissions, produced by electric currents generated by the satellites, flow along Jupiter's magnetic field, bouncing in and out of the upper atmosphere. They are unlike anything seen on Earth.

This ultraviolet image of Jupiter was taken with the Hubble Space Telescope Imaging Spectrograph (STIS) on November 26, 1998. In this ultraviolet view, the aurora stands out clearly, but Jupiter's cloud structure is masked by haze.

December 14, 2000 inaugurates an intensive two weeks of joint observation of Jupiter's aurora by Hubble and the Cassini spacecraft. Cassini will make its closest approach to Jupiter enroute to a July 2004 rendezvous with Saturn. A second campaign in January 2001 will consist of Hubble images of Jupiter's day-side aurora and Cassini images of Jupiter's night-side aurora, obtained just after Cassini has flown past Jupiter. The team will develop computer models that predict how the aurora operates, and this will yield new insights into the effects of the solar wind on the magnetic fields of planets.