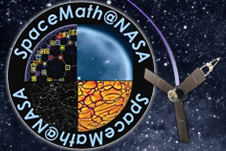 Juno + Math = SpaceMath! SpaceMath@NASA is a resource for teachers that explores math concepts related to mission events and discoveries, with emphasis on those announced in recent NASA press releases. Since 2004, its math problems have been downloaded more than four million times.

The following SpaceMath problems are related to Juno and Jupiter:

Solar Energy and the Distance of Juno from the Sun (SpaceMath Problem 469)
Students use the formula for an ellipse, along with the inverse-square law, to create a mathemartical model that predicts the declining solar power produced by Juno's solar panels as the spacecraft travels from Earth to Jupiter.
[Grade: 9-12 | Topics: algebra; trigonometry; distance formula]
› Download PDF (84 kb)

Investigating Juno's Elliptical Transfer Orbit (SpaceMath Problem 472)
Students use the standard formula for an ellipse to study the elliptical orbit of the Juno spacecraft and relate specific properties of the ellipse to features of the spacecraft's trajectory such as aphelion, perihelion and ellipticity.
[Grade: 9-12 | Topics: formula for an ellipse; semi-major and minor axis]
› Download PDF (140 kb)

Investigating the Launch of the Juno Spacecraft (SpaceMath Problem 471)
Students use a series of images from a launch video to determine the scale of each image and determine the speed of the rocket as it leaves the gantry.
[Grade: 6-8 | Topics: scale models; speed = distance/times]
› Download PDF (48 kb)

The Launch of the Juno Spacecraft - Ascent to orbit (SpaceMath Problem 470)
Students use tabulated altitude and range data following the launch of the Juno mission to determine the speed of the rocket as it travels to Earth orbit.
[Grade: 6-8 | Topics: scale models; speed = distance/time]
› Download PDF (85 kb)

How Big is It? - Io and Jupiter (SpaceMath Problem 135)
Students work with an image taken by the Cassini spacecraft of Jupiter and its satellite Io. They determine the image scale and calculate the sizes of various features in the image.
[Grade: 4 - 7 | Topics:image scaling; multiply, divide, work with millimeter ruler]
› Download PDF (90 kb)

SpaceMath@NASA is produced by Dr. Sten Odenwald at NASA's Goddard Space Flight Center. Visit the SpaceMath@NASA website for additional resources.
› Back To Top