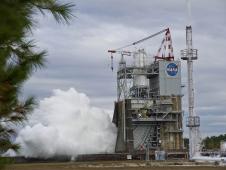 During the 80-second duration J-2X test firing on Dec. 1, NASA began characterizing the rocket engine's combustion stability. (NASA/SSC)
View large image NASA conducted a key stability test firing of the J-2X rocket engine Dec. 1, marking another step forward in development of the upper-stage engine that will carry humans farther into space than ever before.

The Dec. 1 test firing focused on characterizing the new engine's combustion stability, a critical area of development. During the test firing, a controlled explosion was initiated inside the engine's combustion chamber to introduce an energetic pulse of vibrations not expected during nominal operations. Data from this and future combustion stability tests will help engineers understand more about the engine's performance and robustness during engine operation.

The J-2X engine was test fired on the A-2 Test Stand at NASA's Stennis Space Center, in south Mississippi. The engine is being developed by Pratt & Whitney Rocketdyne for NASA's Marshall Space Flight Center in Huntsville, Ala. It will provide upper-stage power for NASA's new Space Launch System. The SLS will carry the Orion spacecraft, its crew, cargo, equipment and science experiments to space -- providing a safe, affordable and sustainable means of reaching the moon, asteroids and other destinations in the solar system.