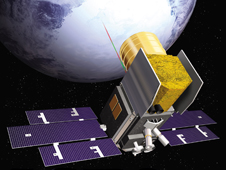 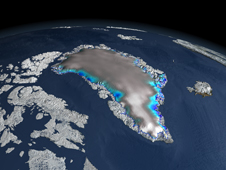 More images from Flickr. Over the last decade, NASA has launched a series of satellites to monitor the health of our planet. One such satellite -- the Ice, Cloud and land Elevation Satellite (ICESat) -- has provided a sustained, big-picture look at ice thickness at Earth's polar regions.

Now, after seven years in orbit and 15 laser-operation campaigns, ICESat has stopped collecting science data. The last of three lasers on the satellite's Geoscience Laser Altimeter System (GLAS) ceased emitting light on Oct. 11, 2009. Attempts to restart the lasers have ended, and NASA is pursing options for satellite decommissioning.

"ICESat's loss is disappointing and it comes at a critical time," said Tom Wagner, cryosphere program manager at NASA Headquarters in Washington. "But we can't lose sight of the fact that ICESat and its team of talented scientists and engineers helped us see the Earth's polar ice caps in a new way. Those observations are feeding a new generation of models to help us figure out where the planet is headed.‬‪‬‪"

As the world's first laser-altimeter satellite, ICESat has measured Earth's surface and atmosphere in "unprecedented 3-D detail," said Jay Zwally, ICESat's project scientist at NASA's Goddard Space Flight Center in Greenbelt, Md. "ICESat has been an outstanding success, despite disappointing limitations in the laser lifetimes. Scientific advances have been made in measuring changes in the mass of the Greenland and Antarctic ice sheets, polar sea ice thickness, vegetation-canopy heights, and the heights of clouds and aerosols."

In the Arctic, for example, scientists used ICESat to map Greenland's dramatic surface elevation, rising to 4,000 meters above sea level. They watched as thin, seasonal sea ice replaced thick, older sea ice as the dominant type in the Arctic Ocean. In Antarctica, scientists achieved a comprehensive inventory of lakes that actively drain or fill under the ice. At both poles, they have tracked glaciers along the coast of the Greenland and Antarctic ice sheets as they empty into the sea.

Learn more about the satellite's early days and subsequent discoveries in this Flickr image gallery.

Despite the end of ICESat's mission, NASA's observations of Earth's polar regions continue. Operation Ice Bridge began in 2009, becoming the largest airborne survey of Earth's polar ice ever flown. For the next five years, instruments on NASA aircraft will target areas of rapid change to yield an unprecedented 3-D view of Arctic and Antarctic ice sheets, ice shelves, and sea ice. The mission will bridge the gap in satellite data until the launch of ICESat-2, planned for 2015.

"Operation Ice Bridge is allowing us to get much higher resolution data over smaller, targeted regions," said Lora Koenig of NASA Goddard, and acting project scientist for the Ice Bridge mission.

Targeted information from aircraft combined with the broad and consistent coverage from satellites contribute to a more complete understanding of Earth's response to climate change, helping scientists make better predictions of what the future might hold.