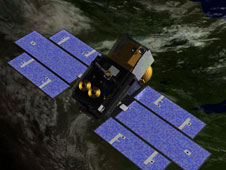 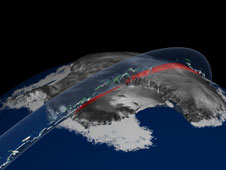 One of NASA's orbiting sentinels is expected to return to Earth in a few days. The agency's Ice, Cloud, and land Elevation (ICESat) satellite completed a very productive scientific mission earlier this year. NASA lowered the satellite's orbit last month and then decommissioned the spacecraft in preparation for re-entry. It is estimated that the satellite will re-enter the Earth's atmosphere and largely burn up on or about August 29.

ICESat was launched in January 2003, as a three-year mission with a goal of returning science data for five years. It was the first mission of its kind –specifically designed to study Earth's polar regions with a space-based laser altimeter called the Geoscience Laser Altimeter System, or GLAS.

ICESat's lasting legacy will be its impact on the understanding of ice sheet and sea ice dynamics. The mission has led to scientific advances in measuring changes in the mass of the Greenland and Antarctic ice sheets, polar sea ice thickness, vegetation-canopy heights, and the heights of clouds and aerosols. Using ICESat data, scientists identified a network of lakes beneath the Antarctic ice sheet. ICESat introduced new capabilities, technology and methods such as the measurement of sea ice freeboard – or the amount of ice and snow that protrudes above the ocean surface - for estimating sea ice thickness.

"ICESat has been a tremendous scientific success," said Jay Zwally, ICESat's project scientist at NASA's Goddard Space Flight Center in Greenbelt, Md. "It has provided detailed information on how the Earth's polar ice masses are changing with climate warming, as needed for government policy decisions. In particular, ICESat data showed that the Arctic sea ice has been rapidly thinning, which is critical information for revising predictions of how soon the Arctic Ocean might be mostly ice free in summer. It has also shown how much ice is being lost from Greenland and contributing to sea level rise. Thanks to ICESat we now also know that the Antarctic ice sheet is not losing as much ice as some other studies have shown."

The End of an Era

After seven years in orbit and 15 laser-operations campaigns, ICESat's science mission ended in February 2010 with the failure of its primary instrument. Because the spacecraft remained in operating condition, NASA's Science Mission Directorate accepted proposals for engineering tests to be performed using ICESat. These tests were completed on June 20. NASA's Earth Science Division then authorized the decommissioning of ICESat. After completing a review of decommissioning activities, the agency directed that ICESat be decommissioned by this August.

Mission flight controllers began firing ICESat's propulsion system thrusters on June 23 to lower its orbit. Thruster firings ended on July 14, safely reducing the lowest point of the spacecraft's orbit to 125 miles (200 km) above Earth's surface. The orbit has since naturally decayed. ICESat was successfully decommissioned from operations on Aug. 14. All remaining fuel on the spacecraft is now depleted, and atmospheric drag is slowly lowering ICESat's orbit until the spacecraft re-enters the Earth's atmosphere.

A statement from the Earth Science Mission Operations office summarized the achievement:


"The ICESat mission operations team is commended for its exceptional performance, working tirelessly for the past eleven years (four years of preparation and seven years of operations), overcoming several obstacles in the early years of the mission, and closing out the mission with a flawless series of orbital maneuvers before final decommissioning. The positive control maintained over the mission right to the end shows the quality and effort that went into designing, building, qualifying, launching, and operating a tremendously successful mission such as ICESat."

The Return to Planet Earth

The vast majority of ICESat will burn up in the atmosphere during re-entry. Of the spacecraft's total mass (about 2000 lbs.), only a small percent will reach the surface of Earth. Some pieces of the spacecraft, weighing collectively about 200 pounds, are expected to survive re-entry. The risk of harm coming to anyone on Earth from this debris is estimated to be very low.

ICESat was not designed to perform a controlled re-entry and is unable to provide targeting to a particular location on Earth. ICESat circles the Earth from pole to pole, so surviving debris could land almost anywhere on the planet. Due to natural variability in the near-Earth environment, a precise location of where spacecraft debris will re-enter cannot be forecast. The U.S. Space Surveillance Network is closely monitoring the orbit of ICESat during its final days and will continue to issue periodic predictions of re-entry time and location. The NASA Orbital Debris Program Office will issue re-entry information based on these predictions.

NASA and international standards for space objects re-entering Earth's atmosphere do not require controlled re-entry but do have requirements and guidelines for the maximum risk posed by debris surviving re-entry.

"The ICESat team has done a marvelous job to ensure that the spacecraft is removed as a hazard to other spacecraft and as a potential source of future orbital debris," said Nicholas L. Johnson, NASA Chief Scientist for Orbital Debris at NASA's Johnson Space Center in Houston.

Despite the end of ICESat's mission, NASA's observations of Earth's polar regions continue. In anticipation of the ICESat mission coming to an end, and in accordance with the National Research Council's Decadal Survey of future NASA Earth science missions, NASA has begun development of ICESat-2, planned for launch in 2015. ICESat-2 will continue the science legacy of its predecessor, and improve our understanding of Earth's dynamic polar regions with new and advanced technology.

The Operation Ice Bridge airborne mission, started in 2009, is the largest airborne survey of Earth's polar ice ever flown. The mission is designed to partially fill the data gap between the ICESat and ICESat-2 satellite missions. For the next five years, instruments on NASA aircraft will target areas of rapid change to yield an unprecedented 3-D view of Arctic and Antarctic ice sheets, ice shelves, and sea ice. Targeted information from aircraft combined with the broad and consistent coverage from satellites contribute to a more complete understanding of Earth's response to climate change, helping scientists make better predictions of what the future might hold.