Multimedia Files in Support of the Operation IceBridge Media Day 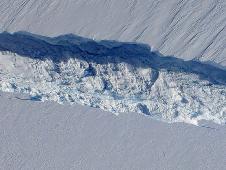 › View larger
A close-up image of the crack spreading across the ice shelf of Pine Island Glacier shows the details of the boulder-like blocks of ice that fell into the rift when it split. For most of the 18-mile stretch of the crack that NASA’s DC-8 flew over on Oct. 26, 2011, it stretched about 240 feet wide, as roughly seen here. The deepest points ranged from about 165 to 190 feet, roughly equal to the top of the ice shelf down to sea level. Scientists expect the crack to propagate and the ice shelf to calve an iceberg of more than 300 square miles in the coming months. This image was captured by the Digital Mapping System (DMS) aboard the DC-8. Credit: NASA/DMS PUNTA ARENAS, CHILE – NASA's airborne expedition over Antarctica this October and November has measured the change in glaciers vital to sea level rise projections and mapped others rarely traversed by humans.

Operation IceBridge, nearing completion of its third year, is the largest airborne campaign ever flown over the world's polar regions. Bridging a gap between two ice elevation mapping satellites, and breaking new scientific ground on its own, IceBridge this fall has charted the continued rapid acceleration and mass loss of Pine Island Glacier. The mission has also flown under the track of the European CryoSat-2 while measuring sea ice conditions in order to compare data sets from each.