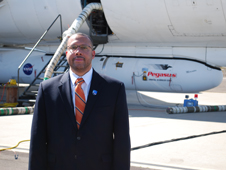 IBEX Mission Manager Greg Frazier. Credit: NASA
> Larger image
As a young boy, the mission manager for the Interstellar Boundary Explorer (IBEX) dreamed of returning to the neighborhood to impress friends with his knowledge of flight. The IBEX mission will provide Greg Frazier with just the example he needs to showcase his knowledge of what it takes to reach the stars.

When launched IBEX will circle the Earth in extremely high-altitude orbits to investigate and capture energetic neutral atoms that originate far beyond the solar system. Known as the interstellar boundary, this region marks where the solar wind meets interstellar space. The two year mission will study how solar wind interacts with the interstellar medium and image that interaction.

As mission manager Frazier is responsible for working directly with the prime contractor, Southwest Research Institute. He must insure that development and execution of the IBEX mission is in accordance with NASA policies and procedures. “I have a team of engineers that I deploy to provide me with technical insight into the mission development,” Frazier says. “If I think the IBEX team needs assistance I can draw from Goddard resources.”

Frazier is well aware of the outstanding resources Goddard can provide because the aerospace engineer grew up here. His professional working experience began within the Mechanical Engineering Branch. Frazier was a co-op student and worked on the Cosmic Background Explorer (COBE) under the leadership of Dr. John Mather, principle investigator.

With his first encounter of experiencing the challenges and discovery of aerospace work, school was never the same for Frazier. His work assignment as a co-op student included assisting in designing hardware that would actually fly onboard the shuttle. “During my next two years of school I did very well because my motivation went through the roof, it was outstanding,” Frazier says.

Following graduation from the University of Maryland, College Park, there were other employment options but Goddard was now home for Frazier. As a full time employee, he became immersed with increased responsibilities. Paired with a designer Frazier was responsible for the design, manufacturing, and flight readiness for mechanical sub-systems to fly aboard various spacecraft. “It felt good, we were an integrated team, we helped each other solve problems,” Frazier says. “There were seasoned individuals around to guide us.”

He has fond memories of the team spending time away from the work environment together. The mechanical systems team would hang out at each others homes or take trips together. “It was like hanging out with the friends back home but with a different set of similar interests,” Frazier says. He calls those growing up years at Goddard instrumental in his understanding of the simplest to the most complex parts involved in space flight.

As the years passed there would be more complex responsibilities, a greater learning curve and greater satisfaction. For the Compton Gamma Ray Observatory (GRO) mission he was responsible for the airborne electrical support equipment which flew onboard the shuttle. Frazier was the lead structural analyst for the X-Ray Timing Explorer (XTE) mission, providing analysis for the mechanical subsystems. He was the mechanical systems manager for the second Hubble servicing mission. On the Burst Alert Telescope (BAT), the largest in-house built instrument at Goddard for the Swift Gamma-Ray Burst (SWIFT) mission, Frazier was the instrument manager.

Frazier now realizes his work from co-op student to SWIFT was training ground for his latest and greatest challenge as mission manager for the IBEX mission. “That is absolutely true and the process of working on in-house projects at Goddard was exactly what I needed,” Frazier says. “It has provided me a greater understanding of the challenges and corrective actions required to keep a mission on track.”

The ability to understand and communicate at all levels of responsibility Frazier values as the most precious asset to oversee the many details in preparing a spacecraft for flight. “Many of the people on my team have worked with me before,” Frazier says. “I know many of the other individuals and where to go to find the skills I need to tackle almost any challenge.” He also insists that each mission is not just about hardware but the development of his team . . . “I value my team and their contributions.”

What is the greatest joy for this seasoned aerospace engineer with the pressures that come with such responsibility? “The most exciting part of my work is to take a concept, lay it out, assemble a team, execute and watch it unfold,” Frazier says. It is also about the human element of any mission. “I was mentored well, people took time with me and I saw the benefit so I try to return that as well. It requires regular interaction to get some less experienced people going on the right track; I have no problem with that.”

The Baltimore City native says he has been back to his old neighborhood and had several conversations about the aspects of flight. He also thanks his parents for instilling a strong work ethic and showing him education would provide a sure path to realize his dreams. “My parents encouraged me to continue my education and choose what I wanted to do and I did.” Dewayne Washington
NASA's Goddard Space Flight Center
› Back To Top