IBEX will explore the boundaries of our solar system. Learn more about the mission through questions and answers.

About Our Solar System's Boundaries

See if you can test your knowledge about this subject or learn more by reading about it.

Grow Text SizeShrink Text Size
NASA Explorer Realizes Possibility of Believing, Achieving
“Exploration is not an option we choose, but a desire written in the human heart.” President George Bush spoke those words during a speech before NASA senior leadership in 2004 to announce a new vision for space exploration. A leadership team responsible for leading this nation’s space explorations and embodying just such a desire to explore. 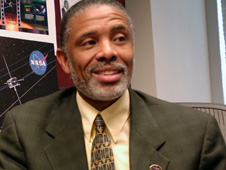 Willis Jenkins at his desk at NASA Headqurters in Washington, DC. Credit: NASA GSFC
> View high resolution photo
One such explorer, Willis Jenkins, Jr., is the Program Executive for NASA’s Explorers Program, Science Mission Directorate/Heliophysics Division at NASA Headquarters. He is also Program Executive for the Interstellar Boundary Explorer Mission (IBEX), a mission to achieve the first global observations of the region beyond the termination shock at the very edge of our solar system.

“The NASA Apollo missions really sparked my interest and I vividly remember when we landed on the moon,” Jenkins recalls. “I was not really into looking up at the stars but I did dream of things that I could do up there.”

In the mid-60’s as NASA mission managers and technicians where exploring the intricacies of space travel and communication the Washington, D.C. native was also exploring the how of transportation and communication. At age 6, he was working under the family car with his dad, a year later he had already built an in-house intercom, and by age 9 he was able to electronically jam local area radio frequencies.

“I told him he was going to be the first man on the moon but I often wondered if he was going to blow the house up,” says his mother, Dorothy Jenkins. “I was actually glad he got that scholarship to go away to school.”

Jenkins was recognized as a gifted student in junior high school by the Charles E. Merrill Foundation program known as A Better Chance (ABC). He began tenth grade attending North Andover High in North Andover, Massachusetts but later transferred to Amherst Regional High School, in Amherst, Massachusetts. So at an age when most boys are struggling with sports, homework and girls, 15-year-old Jenkins was also adjusting to a life away from home.

“I remember when he went off to school he was very lonely,” his mom said. “I always told him he could be whatever he wanted to be.” Jenkins admits the experience taught him to be responsible.

With long distance family support Jenkins was able to finish high school early. He would spend his last high school semester adjusting to college life while attending the University of Massachusetts studying pre-med. “I was interested in biomedical but I was also interested in electrical.” The solution for Jenkins was to study both. “I decided I could invent the machinery that I could use in the operating room.”

After high school graduation, Jenkins relocated to Ohio and then back to Massachusetts to study electrical engineering. Several years into his studies he was forced to return home to take a full time position as an electrical technician.

Returning to an environment reminiscent of his days of tinkering at home Jenkins’ true aspiration re-surfaced, a desire he had compromised to enter high school. “He told the representative from ABC that he was going to be a mechanic,” his mother said. Learning there were no scholarships for a mechanic Jenkins decided to change his focus. He told the recruiter, “I guess I will be a doctor.”

He had continued studying and returned to Northeastern University in Massachusetts several years later to obtain his electrical engineering degree. Jenkins was then able to take on more responsibilities to include several major government contractors. It wasn’t long before he was working on NASA launch vehicles, satellite communications and electrical engineering work for the International Space Station robotic arm.

Eventually, Jenkins became a civil servant at NASA Goddard Space Flight Center (GSFC) working on science missions such as SWIFT, THEMIS, and LandSat-7. After a temporary assignment to the Explorer Program at NASA headquarters he returned to Goddard before accepting a permanent position with the program in 2003. As program executive Jenkins manages NASA’s oldest program dedicated to exploration.

Since 1958 the Explorers Program has been involved in more than 85 United States and cooperative international missions launched to explore our universe. “I really enjoy my work at NASA,” Jenkins says. “I have been able to utilize what I know to help others make a major impact on the space exploration work we do for the nation.”

A desire to explore convinced him to take on the additional responsibilities of Project Executive for IBEX. “I decided this would be another great opportunity for me to explore how things work . . . I really enjoy working the missions.”

Jenkins believes career opportunities have provided experiences necessary for him to become a member of an elite organization created to explore. “I take serious the oath of office I took to work on behalf of the tax payers of the United States; I really take that to heart,” Jenkins says. “I want to make sure folks are doing exactly what they say they are going to do.”

When asked about his wife, Jenkins radiates a huge smile, “She’s beautiful, isn’t she?” Tina Jenkins is a project engineer at GSFC. With their two daughters, the family gives back to the community. “It is a family affair that we try to help others along the way.”

Over the years Jenkins has received numerous awards and recognition for his superior performance of duty. In 2008 has received a NASA Equal Employment Opportunity Medal and a NASA Medal for his contributions to the THEMIS mission.

Jenkins believes his greatest work has been his participation in the education and public outreach efforts for the agency. “I love to go out and talk with kids and tell them they can dream and be whatever they want to be”. . . familiar words that have already propelled an exploring youth to discover the possibilities of believing and achieving.