The IBEX spacecraft was loaded into a truck at Orbital Sciences Corporation, Va., where engineers integrated the science payload with the spacecraft and completed numerous tests to ensure optimum performance during the launch and operational phases of the mission.

“This is a huge milestone for the IBEX mission. It’s great to have our spacecraft making its road trip west,” said Dr. David McComas, IBEX principal investigator and senior executive director of the Space Science and Engineering Division at Southwest Research Institute. “At Vandenberg, IBEX will undergo some final testing, fueling, and spin balancing prior to being mated to a Pegasus launch vehicle.” 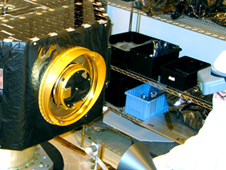 The Interstellar Boundary Explorer (IBEX) spacecraft completed numerous tests of the hardware and software, including the spin test shown in the photo, following integration with the spacecraft. Credit: Southwest Research Institute.
> View large image IBEX will move once more before its scheduled October 5 launch. In late September, the spacecraft will be transported to a facility on Kwajalein Island, a part of the Marshall Islands, roughly equidistant between Hawaii, Japan and Australia. There it will undergo final preparations for its unique launch. An L-1011 aircraft is set to carry IBEX and the Pegasus rocket out over the South Pacific, fly toward the east, and drop it. Shortly after drop, the rocket will ignite and carry IBEX up to about 130 miles above Earth, spin it up to 60 RPM, and release it.

“This move to VAFB begins the final sequence of ground processing for the IBEX mission,” said Greg Frazier, IBEX Mission Manager. “We are all looking forward to completing the ground processing, integrating with the Pegasus launch vehicle and having a successful launch.”

Using a concept never before attempted, the IBEX team integrated its own additional solid rocket motor and internal propulsion system to transport the spacecraft all the way up to its final high-altitude orbit (about 200,000 miles high) — most of the way to the Moon. This groundbreaking, relatively inexpensive launch method holds great promise for delivering future small government and commercial spacecraft to high-altitude orbits.

During its science investigation, IBEX will use a pair of energetic neutral atom “cameras” to image interactions between the million mile-per-hour solar wind continually blown out by the Sun and the low-density material between the stars, known as the interstellar medium — interactions never before imaged. The spacecraft begins imaging the edge of the solar system within a couple of weeks after it reaches final orbit. Every six months, the spacecraft will complete an all-sky map of the interstellar boundaries, expected to reveal much about our home in the galaxy.

“The IBEX mission will provide a much deeper understanding of the Sun’s interaction with the galaxy and will also address a serious challenge facing manned exploration by studying the region that shields us from the majority of galactic cosmic ray radiation,” said McComas.

IBEX is the next in NASA’s series of low-cost, rapidly developed Small Explorers spacecraft. The IBEX mission was developed by Southwest Research Institute with a national and international team of partners. NASA’s Goddard Space Flight Center manages the Explorers Program for the Science Mission Directorate.

For more information about the IBEX mission, visit:
www.nasa.gov/ibex
www.ibex.swri.org/ibex