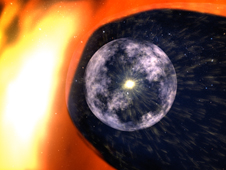 What do we mean when we say something has an edge, or a boundary? Some things, like a table or a soccer field have clear edges and boundaries. Other objects, like cities and towns, have boundaries that aren’t as easy to see. It is hard to say where they end and something else begins. The solar system is more like a city than a table or soccer field.

Could the reach of the Sun’s light be a good way to decide how far the solar system extends? The light from the Sun gets fainter as you move farther away, but there is no boundary where the light stops or where it suddenly gets weaker. How about gravity? Just like light, the influence of the Sun’s gravity extends without limit, although it gets weaker farther away from the Sun. There is not a boundary at which it stops. Astronomers are still discovering objects in the outer solar system beyond Pluto.

The solar wind is different from light or gravity. As it streams away from the Sun it races out toward the space between the stars. We think of this space as “empty” but it contains traces of gas and dust. The solar wind blows against this material and clears out a bubble-like region in this gas. This bubble that surrounds the Sun and the solar system is called the heliosphere. This is not a bubble like a soap bubble, but more like a cloud of foggy breath that you breathe into chilly winter air. Scientists believe that the closest parts of the heliosphere are 90 times farther away than the distance between the Earth and Sun. That’s three times as far as Pluto.

The heliosphere defines one type of boundary of the solar system. 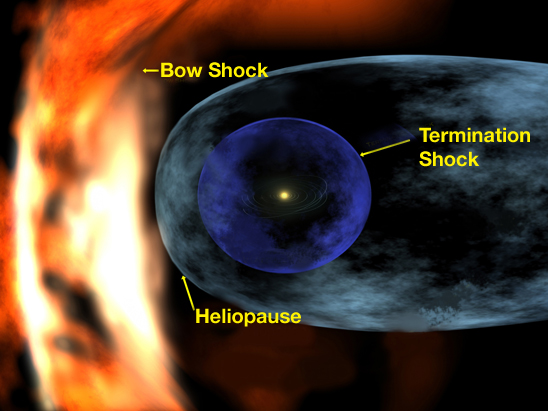 
What happens when the solar wind and the interstellar medium collide?

What is the interstellar medium?

Outer space is not empty space. The interstellar medium (ISM) is the name for the stuff that is in space between stars in our Milky Way Galaxy. The ISM is mostly made of clouds of hydrogen and helium. The rest of the ISM mostly consists of heavier elements like carbon. About one percent of the ISM is in the form of dust.

In some places in space the ISM is not dense at all, but it is much more dense in other regions. However, even the densest parts of the ISM are 1014 (100,000,000,000,000 or 100 trillion) times less dense than the Earth's atmosphere. The density of the ISM ranges from 0.003 molecules per cubic centimeter in regions of hot ionized gases, or plasma, to more than 100,000 molecules per cubic centimeter in regions where stars form. On average, there are only 1,000 grains of dust in each cubic kilometer of space!

> Click here for more information on the composition of the ISM.

Stars form in regions of the ISM that are dense enough for gravity to pull the gas and dust together to make compact, hot spheres. These protostars eventually become so dense and hot that nuclear fusion begins, and they become stars.

Although they are not alive, stars have life-cycles. They are born from the ISM, grow, and die. Some stars die in an explosion called a supernova. After it explodes, a supernova's material is recycled into the ISM.

Exploding stars continually replenish the ISM with their material. In turn, gravity pulls the ISM material together to form more stars.

What is the bow shock or bow wave?

A bow shock or wave will form in front of the heliosphere, as the Sun moves through the interstellar medium. A bow wave is similar to what happens at the prow of a boat, while a bow shock is similar to the shockwave that forms in front of a supersonic jet.

If the Sun is moving faster than the speed of sound in the interstellar medium, a bow shock will form. Otherwise, if the Sun is not traveling that fast a bow wave will form.

What is the heliopause?

What is the termination shock?

The termination shock is the boundary marking one of the outer limits of the Sun's influence, and is one boundary of the solar system. It is where the bubble of solar wind particles slows down so that the particles are traveling slower than the speed of sound. The solar wind particles slow down when they begin to press into the interstellar medium. The solar wind is made of plasma, and when it slows in this way, it goes through many changes. The solar wind plasma gets smooshed together, or compressed like people crowded together in a tiny room. When it is compressed, it also becomes much hotter, in the same way as a bicycle pump heats up in your hand when you vigorously inflate a tire. Also, the solar wind carries outward some of the Sun's magnetic field, which now gets stronger at the termination shock and twists around. We have only two direct measurements of the distance to the Termination Shock. These measurements were made by Voyager 1 and Voyager 2. Voyager 1 crossed the termination shock at 94 astronomical units (AU) and Voyager 2 crossed at 84 AU.

> Learn more about the Voyager mission

A similar shock is formed when you run water from a faucet into a sink. When the stream of water hits the sink basin, the flowing water spreads out at a relatively fast speed, forming a disk of shallow water that quickly moves outward, like the solar wind inside the termination shock. Around the edge of the disk, a shock front or wall of water forms; outside the shock front, the water moves relatively slower, like outside the termination shock. Remember, the water shock is only 2-dimensional or flat. The Boundary of our solar system is 3-dimensional like a sphere. 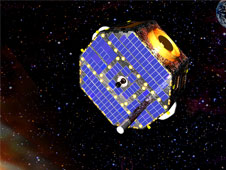 This graph depicts the fraction of high energy cosmic rays (greater than 100 MeV) that pass through the boundary of the solar system. 100% of them are present outside of the Bow Shock. There is a small drop off in the number that make it through to the heliopause. More than 50% are stopped between the heliopause and termination shock, which is at approximately 100 AU. This leaves a fraction less than 25% to permeate to the inner solar system.

The solar system boundary may be defined as the region where the solar wind slows down and interacts with the Interstellar Medium.

What are cosmic rays?

'Cosmic ray' is the (confusing) name given to any kind of energetic particle that comes from outside the Earth. These particles could be single protons, nuclei of different atoms or electrons. Cosmic rays are neither light nor beams of particles, so maybe they should be renamed energetic cosmic particles. Cosmic rays are often made when a star explodes. This is called a supernova. Some cosmic rays can be produced by the Sun and some can even come from as far away as other galaxies. These particles are very energetic, but also very small. They rarely directly hit anything as they travel through space, but if they do it can cause nuclear reactions with atoms. These reactions are similar to the activities in particle accelerators. The Sun's heliosphere protects the planets and other objects in the solar system from some of these dangerous particles. The Earth's magnetosphere and atmosphere protect life on Earth from cosmic rays that make it through the heliosphere. Studying the heliosphere will help us to prepare adequate shielding during future space travel

How do cosmic rays affect DNA?

Cosmic rays can seriously damage DNA. If DNA damage cannot be repaired by the cell, the cell could die. If the damage is copied into more cells, then a mutation could occur. Exposure to large amounts of cosmic rays could increase the risks for cancer, cataracts and neurological disorders. Long term exposure to cosmic rays, or short intense bursts, could affect the evolution of life on Earth.

What are energetic neutral atoms?

Energetic Neutral Atoms (ENAs) are particles with no charge that move relatively fast. ENAs are formed from particles that are ionized, meaning they have lost electrons. Sometimes, these ions interact with neutral atoms taking the electrons from those neutral atoms and becoming neutral themselves. Since the particle is no longer charged (it has equal numbers of protons and electrons) it no longer reacts to the magnetic fields, and travels in a straight line from the spot where the interaction occurred.

This interaction is called charge exchange. Charge exchange can happen between solar wind ions and neutral atoms from the Interstellar Medium. Some of these ENAs happen to travel in just the right way so that they enter the IBEX spacecraft for collection. There are so many energetic particles that interact with interstellar neutrals, that even though they could travel in any direction, the IBEX sensors are able to pick up between 1 per hour and a few per minute.