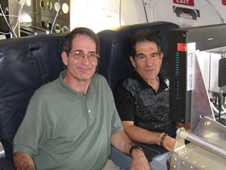 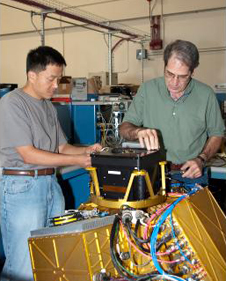 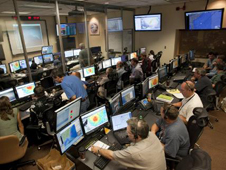 A full house of flight crew and scientists occupy the Global Hawk Operations Center at NASA Dryden during the GRIP science mission in fall 2010. Credit: NASA/Tom Tschida NASA's Genesis and Rapid Intensification Processes (GRIP) 2010 hurricane study was a multi-aircraft mission with a large cadre of researchers. Two who were principal researchers on several airborne sensors had more in common than conducting atmospheric research. Gerry and Andy Heymsfield are brothers.

Gerry Heymsfield joined NASA in 1979 and is a research meteorologist at the Goddard Space Flight Center in Greenbelt, Md. He is the principal investigator for the High-altitude Imaging Wind and Rain Airborne Profiler, or HIWRAP. This system maps three-dimensional winds and precipitation within hurricanes and other severe weather events. HIWRAP was mounted in a NASA unmanned Global Hawk aircraft for flights over the Gulf of Mexico and western Atlantic Ocean during the GRIP campaign.

Andy Heymsfield is the head of the Physical Meteorology Group in the Mesoscale and Microscale Division at the National Center for Atmospheric Research (NCAR) in Boulder, Colo. He was awarded a four-year NASA traineeship to attend graduate school and has participated in numerous NASA science investigations since 1985. He was honored with a NASA Distinguished Investigator award in 2006.

Gerry observed the operation of his instrument from a ground control station at NASA's Dryden Flight Research Center on Edwards Air Force Base in California as the Global Hawk carrying HIWRAP flew above the storms at 60,000 feet altitude. Brother Andy operated his sensors and watched data collection from a seat aboard the DC-8 during a bumpy flight through hurricanes.

Sharing the same type of investigative science work is not the only similarity between the Heymsfield brothers. Andy graduated with a physics degree from State University of New York two years ahead of Gerry, who also earned a physics degree. Both earned masters' degrees from University of Chicago where Andy continued on for a Ph.D. in atmospheric science. Gerry holds a doctorate in the same field, but from the University of Oklahoma.

Gerry credits his father and brother for an interest in science.

"Although not formally trained, my father had a technical mindset," Gerry explained. "Andy's enthusiasm for atmospheric science rubbed off on me. I was actually headed more toward engineering in high school, but decided to study physics because of Andy."

Gerry's HIWRAP instrument will return to fieldwork in August when it will again be mounted in a NASA Global Hawk. Two of these high-altitude, long-duration aircraft will deploy from NASA Dryden to NASA's Wallops Flight Facility in Virginia for the first phase of a multi-year hurricane mission. The Hurricane and Severe Storm Sentinel study will investigate the processes that underlie hurricane formation and intensity change in the Atlantic Ocean basin during the summers of 2012-14.