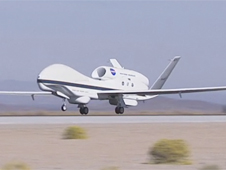 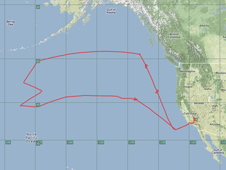 The Global Hawk departed from NASA Dryden on Nov. 6 and flew along the Pacific Coast to as far north as Washington state. During the 24.2-hour flight, the aircraft flew over four Pacific Ocean buoys and a low-pressure system south of the Aleutian Islands in Alaska.
Credit: NASA
› Larger image

HIWRAP radar reflectivity quicklook from the Nov. 6 flight. The plot region covers precipitation associated with a Pacific frontal system. The precipitation slopes upward with height over the colder air to the west (left side of the plot).
Credit: NASA/Gerry Heymsfield
› Larger image 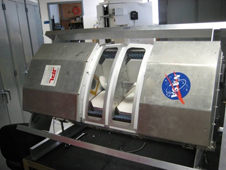 NASA's 2012 Hurricane and Severe Storms Sentinel, or HS3, mission came to an end Nov. 6 when a NASA unmanned Global Hawk aircraft flew a final data-collection mission in the North Pacific Ocean over a large storm in preparation for next year's campaign.

The primary activity of the 2012 HS3 mission included a NASA Global Hawk aircraft that flew from NASA's Wallops Flight Facility in Wallops Island, Va., in September to investigate the environment and cloud structure of hurricanes Leslie and Nadine in the Atlantic Ocean with more than 148 hours flown over six science flights. A second Global Hawk equipped to examine hurricane precipitation and wind structure was unable to deploy to Wallops before the end of the hurricane campaign, but successfully completed its maiden science research voyage in the Pacific flight.

The Global Hawk departed from NASA's Dryden Flight Research Center on Edwards Air Force Base, Calif., Nov. 5 and flew along the Pacific Coast to as far north as Washington state. The aircraft flew over four Pacific Ocean buoys and a low pressure system south of the Aleutian Islands in Alaska. The 24.2-hour flight allowed for testing of several instruments that will be flown during the 2013 HS3 campaign. All three instruments operated well and collected good data.

One of the instruments on this HS3 journey was the High-altitude Imaging Wind and Rain Airborne Profiler, or HIWRAP. This system maps 3-D winds and precipitation within hurricanes and other severe weather events. Gerry Heymsfield is the principal investigator for the HIWRAP and is a research meteorologist at NASA's Goddard Space Flight Center in Greenbelt, Md.

"HIWRAP measured precipitation and Doppler winds in the weather front associated with the low pressure system," Heymsfield said. "The vertical structure of this front is very interesting in preliminary looks since it was in a data sparse region of the Pacific. We are really excited about looking at this data in more detail. While this data was not from a tropical weather system that we are interested in for HS3, the flight nevertheless allowed us to test upgrades to HIWRAP such as real time plots that are very promising for future flights."

A second instrument that flew on this final 2012 HS3 flight was the Hurricane Imaging Radiometer, or HIRAD. HIRAD is an instrument that measures surface wind speeds and rain rates using its rectangular antenna to track storm-induced fluctuations on the ocean’s surface. The antenna measures microwaves emitted by the ocean surface that are increased by the storm. As winds move across the surface of the sea they generate white, frothy foam. This sea foam causes the ocean surface to emit increasingly large amounts of microwave radiation. HIRAD measures that microwave energy and, in doing so, allows scientists to deduce how powerfully the wind is blowing.

With HIRAD’s unique capabilities, the two-dimensional structure of the surface wind field can be much more accurately determined than current operational capabilities allow.

"The Pacific flight was a major step in the development and validation of the algorithms that retrieve wind and rain measurements from the microwave brightness temperatures," said HIRAD Principal Investigator Tim Miller of NASA's Marshall Space Flight Center in Huntsville, Ala.

The High Altitude MMIC (Monolithic Microwave Integrated Circuits) Sounding Radiometer (HAMSR) instrument was also tested during this flight over the Pacific Ocean. For HS3, HAMSR will provide measurements of the moist thermodynamic state (e.g. temperature, water vapor) and precipitation structure in and around a tropical cyclone, which are important measurements for understanding the storm dynamics and evolution.

During the Pacific Global Hawk flight, the HAMSR quick-look temperature and water vapor profiles showed a transition from warmer, moister air to cold, dry polar air as the plane traversed a front associated with a low pressure system centered in the Gulf of Alaska.

"Because HAMSR operates at microwave frequencies, it readily penetrates the clouds that are prevalent in the core regions of hurricanes, which allows us to map out the temperature, water vapor, cloud and precipitation structure there," said Bjorn Lambrigtsen, HAMSR principal investigator at NASA's Jet Propulsion Laboratory, Pasadena, Calif. He noted that infrared sounders are "blinded" by those clouds, and dropsondes only give sparse spot samples -- and neither measures precipitation or cloud structure.

HAMSR and the other two instruments previously flew in NASA's 2010 Genesis and Rapid Intensification Processes (GRIP) hurricane mission. During GRIP, the HIRAD flew aboard a WB-57 aircraft and HIWRAP was mounted in a NASA Global Hawk.