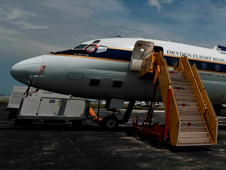 The NASA DC-8 airplane on the tarmac at the Fort Lauderdale International Airport in Florida on Aug. 15 as preparations continue for its part in the GRIP hurricane experiment. Credit: NASA/Paul E. Alers
› Larger image 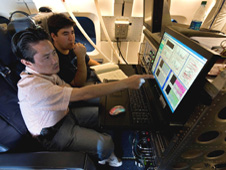 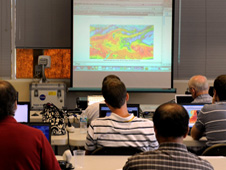 The GRIP science team met on Aug. 16 in Fort Lauderdale to review weather forecasts and plan the first flight of NASA's DC-8 aircraft. Credit: NASA/Paul E. Alers
› Larger image The first flight of NASA's hurricane airborne research mission is scheduled to take off from Ft. Lauderdale, Fla., on Tuesday, Aug. 17. NASA's DC-8 research aircraft will be making a planned five-hour flight along the Gulf Coast from western Florida to Louisiana primarily as a practice run for the many scientific instruments aboard.

Mission scientists, instrument teams, flight crew and support personnel gathered in Fort Lauderdale this weekend to begin planning the six-week Genesis and Rapid Intensification Processes mission, or GRIP. NASA's DC-8, the largest of NASA's three aircraft taking part in the mission, is based at the Fort Lauderdale airport. The two other aircraft -- the WB-57 based in Houston and the autonomous Global Hawk flying out of southern California -- will join the campaign in about a week.

The target for Tuesday's "shakedown" flight is the remnants of Tropical Depression 5, a poorly organized storm system whose center is currently hugging the coasts of Mississippi and Louisiana and moving westward. While forecasters do not expect this storm system to strengthen significantly before it reaches landfall in Louisiana, the system offers the DC-8's seven instrument teams an opportunity to try out their equipment on possible convective storms. Rainfall rates, wind speed and direction below the airplane to the surface, cloud droplet sizes, and aerosol particle sizes are just some of the information that these instruments will collect.

GRIP science team members and project managers are now meeting daily at the airport to review weather forecasts and plan upcoming flights with their counterparts in two other airborne hurricane research missions sponsored by the National Atmospheric and Oceanic Administration (NOAA) and the National Science Foundation. Instrument teams are also working on their equipment onboard the DC-8 in preparation for the flight.

On Sunday, Aug. 15, NASA's Global Hawk completed a successful test flight over NASA's Dryden Flight Research Center in Edwards, Calif., that took the remotely piloted plane to an altitude of 60,000 feet. The last of three instruments being mounted on the Global Hawk for GRIP is being installed this week. Steve Cole
NASA Headquarters, Washington, D.C.
› Back To Top