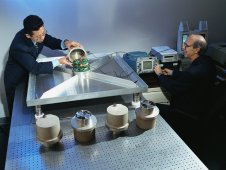 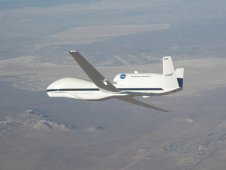 The Lightning Instrument Package will fly aboard the Global Hawk, a remotely piloted airplane that reaches altitudes of 60,000 feet, about twice the height of a commercial airliner. LIP has flown numerous times before, but will now be on an aircraft that can stay in the air for 30 hours, an unprecedented improvement. (NASA) 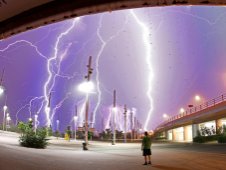 The instrument will measure the amount of lightning produced by hurricanes and tropical storms. Lightning’s connection to hurricane intensification has eluded researchers for decades, and NASA scientists hope the upcoming hurricane experiment will help answer some puzzling questions. (NASA) 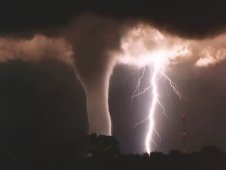 Lightning can serve as a natural sensing tool that allows scientists to understand what else could be happening in a storm. (National Weather Service/F. Smith) Lightning's connection to hurricane intensification has eluded researchers for decades, and for a riveting 40 days this summer, NASA lightning researchers will peer inside storms in a way they never have before.

Earth scientists and engineers at NASA's Marshall Space Flight Center in Huntsville, Ala., will soon fly the Lightning Instrument Package, or LIP, a flight instrument designed to track and document lightning as hurricanes develop and intensify. In August and September, LIP will fly on a remotely piloted Global Hawk airplane over the Gulf of Mexico and Atlantic Ocean at an altitude of 60,000 feet. LIP will be part of a NASA hurricane study called Genesis and Rapid Intensification Processes, or GRIP for short. The study involves three storm chaser planes mounted with 15 instruments. LIP and the other instruments will work together to create the most complete view of hurricanes to date.

"We're now putting LIP on an aircraft that can stay in the air for 30 hours," said Richard Blakeslee LIP principal investigator and Earth scientist at the the Marshall Center. "That’s unprecedented. We typically fly on airplanes that fly over a storm for a period of 10-15 minutes. But this plane can stay with a storm for hours."

"We'll be able to see a storm in a way we’ve never seen it before," he added. "We'll see how the storm develops over the long term, and how lightning varies with all the other things going on inside a hurricane. It's the difference between a single photograph and a full-length movie. That’s quite a paradigm shift."

While scientists know an increase in lightning means the storm is changing, it remains a mystery as to whether that increase signifies strengthening or weakening. Though scientists have quite a few ideas, they lack the data to firmly establish a concrete relationship. Researchers hope LIP's upcoming flights will change that. If scientists can figure out the ties between lightning and hurricane severity, meteorologists may be able to greatly improve their short-term forecasts. Researchers have connected lightning to everything from strong winds to flooding to tornadoes, and a few extra minutes of warning time can save lives each year.

"We can use lightning as a natural sensing tool to see into the heart of a storm," said Blakeslee. "Lightning allows us to get at rain and other processes going on within a storm."

For Blakeslee and the rest of the LIP team, the hurricane study this fall presents a tremendous opportunity. In its nearly 15-year lifespan, LIP has flown nearly 100 missions in 10 major field campaigns, soaring over more than 800 storms. That's unparalleled for a lightning instrument, according to Blakeslee, and LIP researchers hope it will continue its long tradition of successful research.

The Guts of the Lightning Instrument Package

LIP's instruments may look simple, but they're surprisingly complex. To measure the electric field in a storm, the instrument relies on electric field mills, devices that allow scientists to measure the amount of lightning a storm produces. Originally developed at NASA, the mills look like big cans -- each about a foot long and approximately 8 inches across. As the instrument flies through the air, a plate covering each can rotates, covering and uncovering four metal disks housed inside. Uncover a disk and electricity from the storm rushes in. Cover the disk and it rushes back out. The whole process converts the electrical current from DC to AC and back to DC, allowing scientists to measure how strong a storm's electric field is, and how prone to lightning it might be. A sudden shift in the strength of the electrical field allows scientists to determine that a lightning strike has occurred.

In addition, a conductivity probe reveals how easily electrical current can flow through the storm to the upper part of the atmosphere. The probe is a small nose-cone shaped device with two sensor tubes attached to each side. As the plane flies near a hurricane, small electrical particles called ions rush through the tube, allowing the team to count them.

The LIP team uses all that data to determine how much lightning a hurricane produces and where it originates within the storm. By combining that data with wind speed, rainfall rate and other information, researchers can connect how lightning relates to hurricane intensification. And because Blakeslee and his team get their data real time, they can redirect the plane as needed to improve the likelihood of quality results.

After the summer hurricane study ends in September, the team will analyze, evaluate, and eventually release the data, a process which should take several months. Following that, the Lightning Instrument Package will continue to fly in hurricane and storm studies in hopes of collecting more data. The more data, the better the forecasts, Blakeslee said -- and the nearer scientists move to understanding these powerful storms.

The Long Journey of LIP

Of course, Blakeslee and the rest of the LIP team have had to overcome their fair share of challenges.

"When we first started out, we didn’t even know if what we do now was possible," Blakeslee said. "One of my colleagues told me, 'You won’t be able to make current measurements over storms.' But I said, 'Yes we can.' And now we do."

"It's a pretty rewarding feeling," he said. "The biggest challenge now is that there’s always more to study than we possibly can. We've got to pick and choose, and sometimes that can be frustrating."

But for Blakeslee, there's nothing else he'd rather do.

"Lightning is just cool," he laughed. "I've always enjoyed hands-on science, and everything about lightning measurements is hands-on science. You build the instruments. You put them on airplanes. You go out and fly them. You get back the data. And then there's the satisfaction that it’s not all abstract -- we can actually apply what we're learning to real people, real situations and real problem-solving."

For now, the LIP team looks forward with anticipation to sending their instrument out on an unprecedented journey -- hopefully one that will bring scientists one step closer to solving one of science’s biggest mysteries.